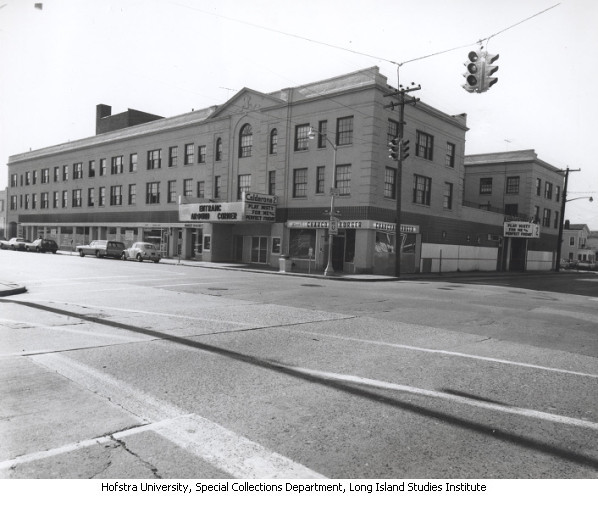 The Rivoli Theatre was opened on April 3, 1926, and was part of the Calderone Theatres chain. It was on Main Street about a block or so east of the Calderone Theatre. I don’t remember any details about the auditorium, but had the impression that it was in the same style as the Valley Stream Theatre or Lynbrook Theatre. The marquee was standard white glass and stainless with R-I-V-O-L-I in green neon script on the sides facing up and down the block. The facade, from what I recall, was as severe as the Valley Stream Theatre and Lynbrook Theatre. I think in later years it was taken over by one of the local universities, and then subsequently demolished along with so much of Hempstead’s history.

The last movie I can remember seeing there was some sort of sci-fi fantasy in the late-1950’s - early-1960’s in which the machines such as flying machines were actually animated line drawings, but the people in them were real. No, I’m not dreaming, someone out there must have seen this bizarre film too. It’s name escapes me.

I lived in Hempstead when I was a kid and I remember seeing a kid’s mantinee at the Rivoli of “Mad Monster Pary?” in either late 1967 or 1968. I also remember back in the late sixties this kid telling me about how he had seen “Planet of the Apes” with “this movie about cavemen being chased by dinosaurs.” I had no idea what he was talking about, but years later I looked up ads from the period in Newsday on microfilm at the Levittown library and discovered that what he had seen was a double feature of “Planet of the Apes” and “One Million Years B.C.” that had played at the Rivoli the last week of June 1968. I also remember that my father took me in 1969 to the Rivoli to see a double feature of “The Sand Pebbles” and “Che!” I never recalled much of “Che!” but “The Sand Pebbles” became one of my favorite movies. I can’t recall the Rivoli in any vivid detail but I’ll never forget the movies I saw there.

Exterior view of the auditorium.

Here’s a 1971 photo that reveals the theatre was known for a time as Calderone 2, no doubt due to its proximity to the Calderone Theatre, just one block away on N. Franklin Avenue, at the end of W. Columbia Street – which is shown here being re-christened in honor of the Calderones. And here is another shot showing the full Main Street facade as well as the alternate marquee and entrance around the corner on W. Columbia. It was actually this entrance which was used, as the big Main St marquee announces (“Entranc Around Corner”). You can also see the fly tower rising over the top of the facade to the left.

These pics come from Hofstra University’s excellent Calderone Theatre Collection. If you click on the photos, you may zoom in on the image. You may also click on the thumbnail to move the “red box” around to change the area of detail you are viewing in the bigger image.

By the way, the building that replaced this theatre is called Rivoli House. Oh, and there is no evidence of W. Columbia Street still being known as “Calderone Way!”

Oh and Robert… Could the film you described in the introductory comments above be “Kronos?” I seem to recall that sci-fi flick has some rather cheaply rendered alien machines that sort of “marched” around on four legs that looked like firing pistons! Can’t remember much else about the movie except for that!

According to the info provided for this image from the Hofstra collection, Frank Calderone addresses the audience at the former Rivoli at the occasion of his donating the theatre to Adelphi University on May 10, 1978.

Click “Next” at the upper right side of the page header and you will be able to view several other images associated with the Rivoli, including a closer view of the alternate W. Columbia St entrance for the theatre (also dated May 10, 1978) as well as an image of the theatre’s ground-breaking and an artist’s architectural rendering of the theatre’s exterior.

The architectural rendering Ed Solero linked in the previous comment to shows that the Rivoli was designed by the firm Reilly & Hall.

Although the text of the pages about this theater in the Hofstra collection (the last two links in Ed Solero’s previous comment) gives the opening date of the house as April 3, 1926, a notice that plans were being drawn for the project was published in the April 28, 1921, issue of Engineering News-Record:

As both sources name Reilly & Hall as the architects, one of two things must be true; either it took the Rivoli Theater Corporation five years to get this house built, or Hofstra got the year it opened wrong. Items in other trade journals from 1921 indicate that contracts for the Rivoli were let in July, and that construction was set to begin in August, but I can’t find anything later.

Joe, it would probably take a visit to a Nassau County library and a perusal of local papers from that period to see if any advertisements for the Rivoli are to be found.