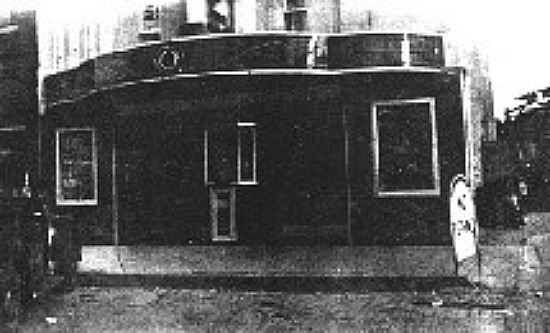 The Tivoli Theatre opened in fall of 1937. In 1938 it was renamed New Globe Theatre following alterations by architect Jerome Crowley. It was destroyed by fire in 1943.

Once the war ended, the new theatre was built in 1946 becoming the longest running of the four Globe locations.

Fred Hartley opened the original Globe Theatre on April 20, 1914. The small town got a second theatre from Clarence E. Cook and V.O. Moore who announce the Tivoli Theatre in 1936 which opened in the Fall of 1937. The town struggled to keep both operations going so Presley purchased the Tivoli Theatre from Cook & Moore. A week later, the Tivoli became the New Globe Theatre ending the short run of the Tivoli. From there it was fire gutting the theatre, moving to a church, and on to this fourth and final Globe location.

Theater building is still there, with a very ugly façade which might be from around 1960-70. It appears to be a doctor’s office.