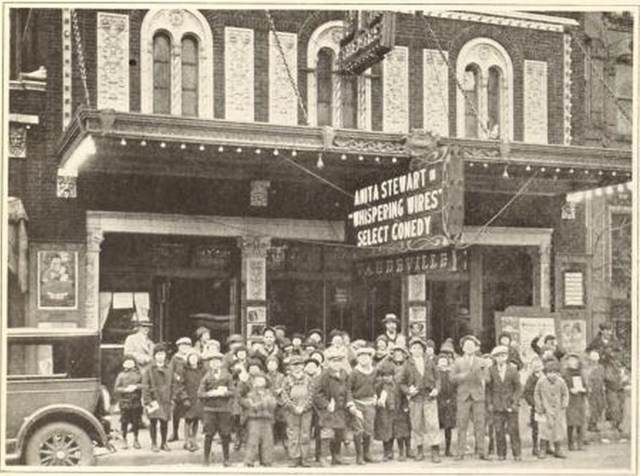 Opened November 25, 1916 for the Ascher Brothers circuit as the Lane Court Theatre, this theatre originally sat close to 1,000, and presented both movies and vaudeville acts. It was equipped with a Kimball organ. Located in the Lincoln Park neighborhood at W. Armitage Avenue (which was then known as Center Street) and N. Clark Street, the Lane Court Theatre was later renamed the Town Theatre, and became a burlesque house. By the 1960’s, it was showing adult movies, which it continued to do until it became the Town Underground Theatre screening independent movies from April 14, 1967.

In 1977, the Town Underground Theatre was converted into a concert venue, renamed the Park West, and has served in this capacity ever since. Artists such as Tina Turner, Prince, and Eurythmics have performed the Park West, making the 750-seat theatre one of Chicago’s most popular smaller concert venues. The theatre is also used for special events.

The recent opening of the Lane Court Theatre was noted in the December 9, 1916, issue of Motography:

“Ascher Brothers' new Lane Court Theater in Chicago was opened to the public on Saturday, November 25, with much pomp and ceremony.

“In point of artistic decoration and novelty in construction there possibly is no other theater in Chicago resembling it.

“The arrangement throughout the house is what is generally conceded to be the most desirable. The interior of the theater is diamond shaped. The screen is placed in one corner of the building and the orchestra pit is sunk out of view, immediately under the screen. The walls are paneled and artistically finished in gold and tinted in delicate hues.

“In the center of the house there is an electrically lighted dome which will deflect a mellow light throughout the entire theater during performances, expelling much of the gloom and eyestrain now a commonly heard-of evil. Probably this will explain why a great many older people refrain from attending picture performances.

“The organ pipes are placed in two opposite corners with a large open compartment in back which will permit the organist to obtain some very beautiful musical effects. A Kimball organ has been installed, and an eight-piece orchestra will be a regular attraction. The ventilation of the theater is accomplished through a series of grates inserted into the walls near the floor.

“There will be a matinée each day, starting at 2:30 o'clock and lasting up to 5:00 o'clock; the evening performances will start at 6:30 o'clock and run until eleven. The admission prices will be: Children, five cents, adults, ten cents, and when special attractions are being shown the price will be raised to fifteen cents.”

This opened on April 14th, 1967 as the Town Underground. Its grand opening ad uploaded.

Aaron Gold led off his Tower Ticker column on Thursday, October 18, 1973 with “Another X-rated movie house bites the dust… the Town Theater on Armitage is being remodeled into a 500-seat dinner playhouse with projected mid-December opening date”. The last ad for the Town appeared in the Tribune three days earlier (October 15, 1973) and featured a triple bill of “Venice Nightmare”, “Virginia the Maid” and “The Pick-Off”. My last two times seeing concerts at the Park West were over 20 years ago (November 1995, Cathy Richardson Band cd release party and concert; November 1997, Paula Cole and Jennifer Trynin).

Does anyone know if The Roots played here in early/mid 1990’s?

Jam Productions downloadable coloring book of the Park West and other theatres.

Roger Ebert’s 1973 review of “Deep Throat” at the Town Theatre.

It was still the Town Theatre in a Spring 1964 Old Town guide book.

This paragraph about the Lane Court Theatre appeared in Moving Picture World for March 10, 1917, as part of an article about the Ascher Bros. circuit:

“The Lane Court theater, on Lane Court and Center street, was opened to the public on Saturday, November 25, 1916. This is one of the most recent acquisitions to the Ascher chain. Henry W. Peters was chosen to manage this house, and the Ascher policy is being maintained in the selection of the programs. Only the latest feature releases are shown with a daily change in the entire program. The musical accompaniment is furnished by a five-piece orchestra and a pipe organ. An unusual ventilating system has been installed in this building, the air being introduced and exhausted from the side walls, thus eliminating any possibility of draft and dust. There are 1,000 seats in the auditorium, upholstered in leather. The house has no gallery.”