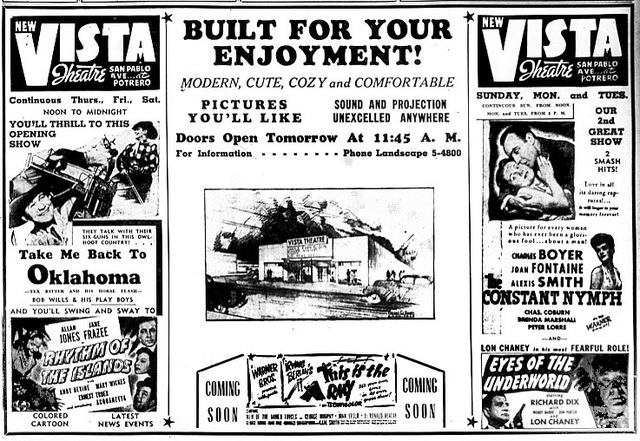 The Vista Theatre became El Cerrito’s second indoor movie theatre (after the 1937 opened Cerrito Theatre) when it was opened at 11390 San Pablo Avenue by Blumenfeld Theatres on Thanksgiving Day, November 25, 1943 with Tex Ritter in “Take Me Back to Oklahoma” & Alan Jones in “Rhythm of the Islands”. The Vista Theatre ran primary second run product during all of it’s years of existence which ended when it closed in 1956.

After the Vista Theatre closed, the stripped of equipment and subsequently vandalized theatre sat vacant for four years until it was purchased and renovated by the Contra Costa County Civic Theatre (CCCT) and used for eight years (1960-1968) for their live theatre productions. In 1968 the building housing the theatre was sold and CCCT was forced to vacate. The front of the theatre was demolished at a later date and the auditorium is currently used by Atlas Liquors.

Only the front portion of the Vista was torn down. Atlas Liquors occupies what was the main part of the theater(albeit totally gutted)with a small driveway in front where the lobby and a couple of small businesses would have been. Atlas liquors took it over in the early 70’s after they lost their original location for construction of the El Cerrito Del Norte BART station. They’ve now been in that space longer than the theater was.

Opened with a coloured cartoon(not named), latest news, “Take me back to Oklahoma” and “Rhythm of the islands”.