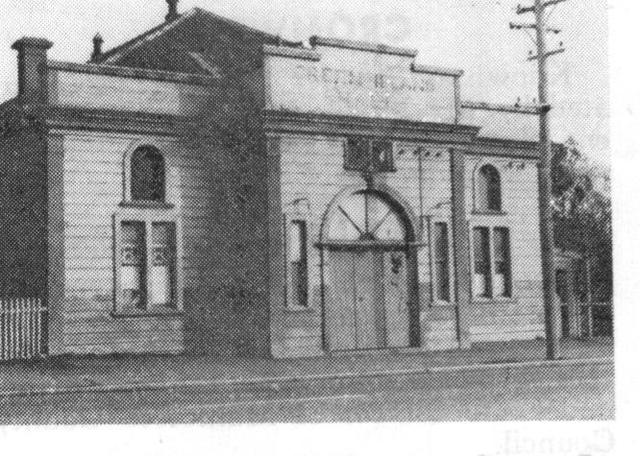 Green Island is located some 8 kilometres south of Dunedin. Cinema arrived in Green Island in 1904. From 1934 until 1962 the cinema was run by the local Borough Council, when with the advent of television hand the control to an independent.

The Municipal Theatre, Green Island, was built in 1887, and situated about where the State Highway One; Brighton-Abbotsford-Green Island-Mosgiel turnoff is (the address above is approximate).

The first recorded movie screening in Green Island was on 14th October 1904, by Coopers Imperial Biograph Company. Stevensons Pictures operated the Municipal from 28th June for one month; followed by Howards Pictures, operators of the Mosgiel Cinema, from 10th April, 1919.

Howards were taken over by Bo-Peep Enterprises Limited, operators of the Coronation Hall, St Kilda, on 16th August 1919. Two months later they were themselves were taken over by Provincial Cinema Company, who in turned closed the Municipal Theatre, along with four other cinemas on 29th November 1919.

The Municipal Theatre remained closed until the Green Island Borough Council reopened it on 7th April, 1934. Sessions were every Wednesday and Saturday, but were increased to include Fridays from 20th September 1957. The Friday sessions lasted two years.

By 1959 the writing was on the wall for the old wooden building. The land it occupied was required by the Ministry of Works for the proposed Dunedin to Mosgiel expressway. The Municipal Theatre closed its doors for the last time on 23rd June 1960, and over the next few months was demolished.