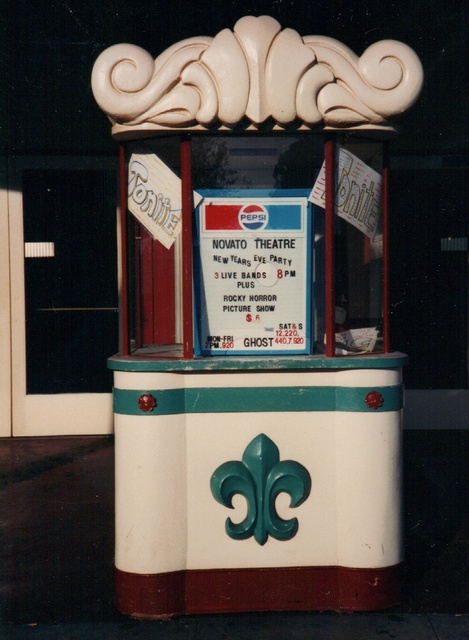 Built in 1948, the theater functioned as movie theater continuously until 1991, when it closed.

In 1996, the theater was purchased by a non-profit, which intends to restore the theater as a performing arts center for Toledo’s small downtown.

From the current text of the intro above: “In 1996, the theater was purchased by a non-profit, which intends to restore the theater as a performing arts center for Toledo’s small downtown.” What, Toledo doesn’t have a theater of its own to renovate?

On the photos: 1960s shingled mansardish roof extension. Ugh. If they renovate I hope they peel that thing off.

Don Donohue frequently wrote pieces for Boxoffice Magazine’s “The Exhibitor Has His Say” feature in the 1950s. Here’s a sample- from the December 8, 1951, issue, his comment on the Universal-International release “You Never Can Tell” with Dick Powell: “This is a real turkey— my poorest Sun., Mon. in many a week. I went along with U-I on top terms because of a saturation booking, but never again. My fingers will burn for weeks.” And that was one of his less acerbic reviews. I sure wouldn’t have wanted to cross Don.

The Novato Cinema may re-open.
A non-profit group is trying to raise enough money to turn the old movie house into a place where they can show movies and have live stage performances. I wish the luck, I would love to see a movie in the old theater.

Here are some articles dealing with the renovation of the theater:

Here is another article:

Here is the latest on the Novato: http://www.marinij.com/arts-and-entertainment/20150810/novato-groups-plan-for-new-downtown-theater-inching-closer-to-reality#disqus_thread

Wow the best and most beautiful box office design. Must be a lovely theatre.