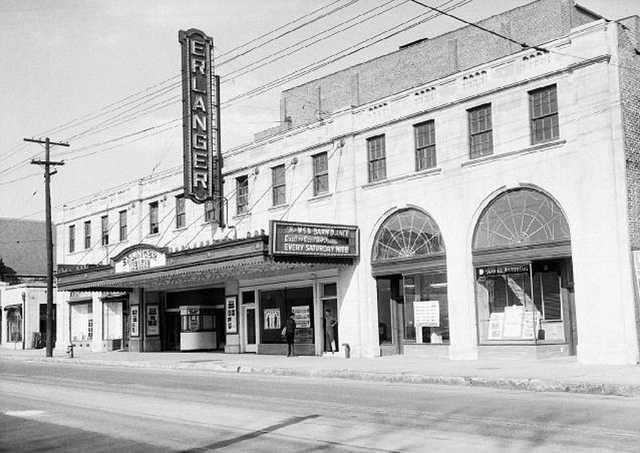 The Erlanger Theatre opened December 27, 1926 as a live 1,790 seat playhouse with “Earl Carroll’s Vanities” featuring a cast of 100. It had a large stage and four floors of backstage dressing rooms. There were 672 seats on the main level, 190 in the first balcony, and 928 in the second balcony. By 1950 it had been renamed Tower Theatre and was operating as a movie theatre.

Sometime around the late-1950’s, the Martin Theatres chain took over and completely rebuilt the inside to the plans of architectural firm Finch, Alexander, Barnes, Rothschild & Paschel. On October 3, 1962 it became the Martin Cinerama Theatre, equipped with the 3-strip system and opening with “The Wonderful World of the Brothers Grimm”. Later two 70mm projectors were installed.

By then the building was owned by the North Avenue Presbyterian Chuch located next door, and they demolished the theatre in 1995 to build a parking lot. 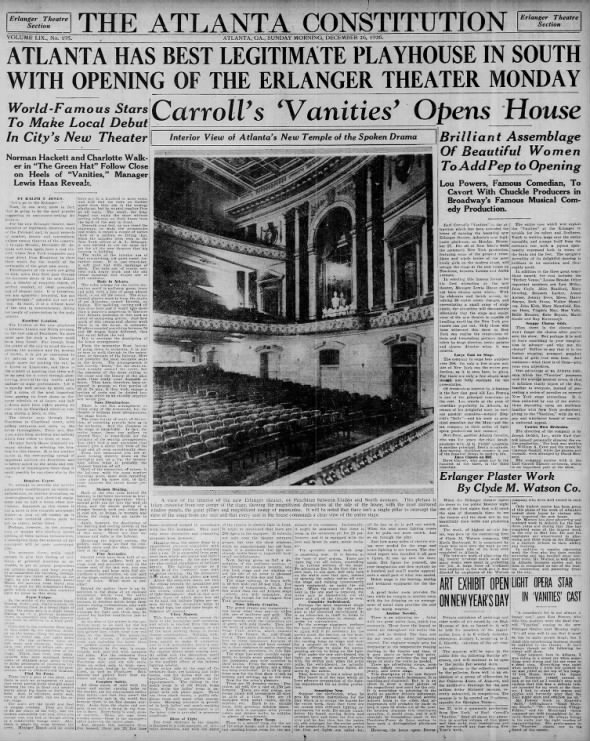 Someone asked why they masked the screen for The Sound of Music. Because of the contract with Cinerama Inc. plus, it was better for the theatre as they didn’t have to pay any fees to them! Also, they would of had to stretch the 2.2 image to fit the 2.76 AR screen.

Page 35 of the December 26, 1926, issue of The Atlanta Constitution says that an Atlanta architect named Raymond C. Snow designed the Erlanger Theatre. Another of his buildings, an office block at 161 Spring Street NW, was nominated to the NRHP, and the nomination form says that very little is known about Snow, but that established his office in Atlanta in 1923 and he appears to have died before 1930.

Reports of his death may have been exaggerated, though, as I found two later apartment projects by an architect of that name: Redmont Gardens in Birmingham, Alabama, built 1938-1939, and and Gilmour Court Apartments, Richmond, Virginia, for which permits were issued in 1938. This Snow’s office was in Washington, D.C., but it could have been the same architect.

I do wonder if that splendid Baroque interior of the Erlanger seen in the Constitution photo was actually designed by Snow, though. It is so different from the restrained, Georgian exterior of the theater itself and the very similar ground floor of the office block on Spring Street, which the theater’s exterior closely resembles.

Snow’s other surviving buildings also feature rather plain exteriors. It’s possible that the promoters of the theater hired another architect or designer to do the interior, which is quite splendid. If they did, the Constitution didn’t reveal who it was. But the Erlanger’s facade is so much like the building on Spring Street that I have no doubt they, at least, were both Snow’s work.

Reopened as the Martin Cinerama on October 3rd, 1962.

New article out on Atlanta’s large format and roadshow history. This and several other Atlanta cinemas get plenty of mentions in the piece.

A pathetic sight of the marquee of the Atlanta during Christmas of 1972 has been added to the photo section.

What did the interior look like after Cinerama conversion? Looking at the Erlanger picture, imagine a dropped ceiling under the second balcony. Now cover all the walls with curtains. This drastic change sealed the building’s doom when resue attempts were made prior to demolition.

My parents went to revival meetings at the Tower Theater. They said that it had two balconies. They said I went with them but I must have been all of 2 or 3.

I remember seeing Peter Pan here after the cinerama conversion. They had dropped the ceiling under the second balcony and curtains ove r the walls. There was also wall to wall carpet. You could not bring drinks into the auditorium because of the carpet.

In the 1970s I saw King Kong there. The wall to wall carpet was still there and very smooshy.

I saw most of the major attractions there when it was the Columbia. The wall to wall carpeting was gone. This was the last place my father saw a movie. We saw Greystoke here. My parents were surprised at how it had changed.

The Intermission Snipe Of The Martin Theatre From Late 1962 When It Was A Cinerama Was Found On YouTube, But The Word “Georgia” During The Snipe Was Spelled Incorrectly, Because It Mis-Replaced The “G” And “I”.