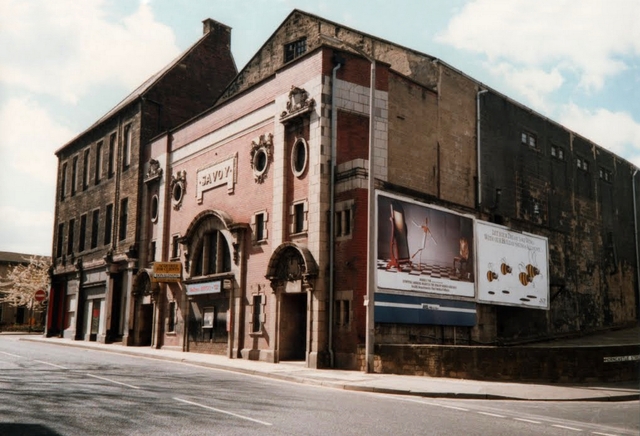 Located in Cleckheaton, West Yorkshire. The Picture Palace was opened in 1910. It was re-named Savoy Cinema in the 1920’s. By 1931 it was operated by Goodall’s Pictures (1931) Ltd. and had been equipped with a Western Electric(WE) sound system. The cinema also boasted a café attached.

By 1954 it had been taken over by the Leeds based Star Cinemas chain. and CinemaScope was fitted in 1955. The Savoy Picture House was still operating in 1966, but had closed by 1980. It has since been demolished.

The Savoy is not listed in Kinematograph Year Book 1914. Under Cleckheaton there are just two entries: the Picture Palace around the corner in Albion Street; and the Temperance Hall a few hundred yards away. ‘West Yorkshire Cinemas & Theatres’ by Peter Tuffrey gives 1923 as the opening year.

Until Star acquired it, ownership was with Goodalls Pictures Ltd (later Goodalls Pictures (1931) Ltd) who gave the business address as Albion Street and the same phone number as the Picture Palace. Seating was initially given as 1200; but listings in the Star days gave 1214.

Also in ‘West Yorkshire Cinemas & Theatres’ by Peter Tuffrey there is a photo taken (probably) in the mid 1920s of the Picture Palace in Albion Street. To the right of the Palace there is a tall, narrow, new building with a Tudor-bethan finish to the upper façade. It has three double-door entrances above which is ‘Savoy’; but there is no display matter whatsoever, just tasteful shrubs by the doors. However, another photo shows the principal entrance to the Savoy was on Bradford Road. Were the rooms on the upper two floors in Albion Street, perhaps, the offices of Goodalls Pictures?

The original sound system was BTH (British Thompson Houston). Some time around 1941 this was replaced with WE (Western Electric).

Up to, and including, KYB 1950 the listing for the Savoy had “café attached”. Was that above the entrance/exit doors in Albion Street?