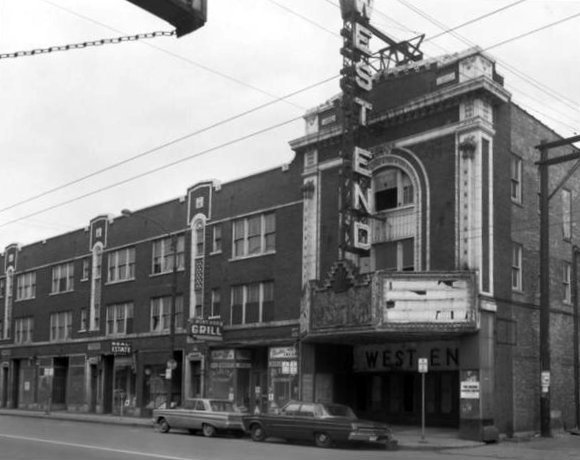 This moderate-sized movie house was opened November 23, 1916, as part of the Lubliner & Trinz circuit, in the Austin neighborhood. It was located on S. Cicero Avenue, between W. West End Avenue and W. Washington Boulevard not far from the border with the suburb of Oak Park.

A novel contest has been conducted at the West End Theater, 121 North Cicero avenue, in conjunction with the showing of “These Glamour Girls.” Six Austin girls were selected to compete against the six Hollywood stars. West End patrons voted to determine which type of beauty is more appealing, the Hollywood variety or the Chicago. The result of the contest so far shows the local girls leading 469 to 437. “These Glamour Girls,” starring Lana Turner, is now showing at the West End, together with “Adventures of Sherlock Holmes.”

I went to The West End with my younger sister for hours-long cartoon shows and various serials in the early 50’s. We moved in 1955 but it was definetly operating in ‘53 or '54. The Garfieldian newspaper used to drop their papers there for the carriers to fold prior to leaving on their routes and I sat in that empty outside lobby area many times doing just that.

Austinites seeking the destruction of an abandoned building in the area have completed cleanup operations on the building to make it less of an eyesore, until the building is demolished or renovated. The building, the former West End theater, 125 N. Cicero Ave., was boarded recently after residents and the Austin Community organization (ACO) complained the open building was dangerous and had become a refuge for skid row characters.

Cleanup task force members painted the bare boards, cut down high weeds and grass, and picked up trash and debris around the building. Capt. John Neurauter, commander of the Austin police district, labeled the building “a bad place. We have been there many times to arrest delericts bedded down in there. It is also very filthy.”

TRAIN GUNS ON WEST END
(The Garfieldian, April 7, 1965)
Another abandoned eyesore theater building will be a topic of discussion at the Austin Community organization housing committee meeting scheduled for 8 pm. tomorrow (Thursday) at the Austin YMCA, 501 N. Central. It is the West End theater building at 125-35 N. Cicero which was converted to a dance hall after movies were halted but is now vacant. The building was described as “a hazard and blight on the community” by Mrs. Marcella Kane, 5010 Washington, who is vice chairman of me United Property group. Mrs. Kane said that the owner of the building, Success Savings & Loan Association, La Grange, and managers, Wm. J. Eitel, realtors, 1910 Addison, have been invited to attend the meeting. The West End action is the outgrowth of the campaign to get the vacant Symphony theater, 4937 Chicago, repaired or razed which was started by the Austin News.
According to the ACO, owners of a third building at 4854 Fulton, and representatives of National Mobile Pantry, were also invited to the meeting.

Intersting, if I were homeless I would like to live in an old theatre!

I’m not sure you would. It would be pretty easy for a homeless guy to get the crap kicked out of him in an abandoned movie theatre.

Some time ago, I spoke to a friend who spent his first eleven years of life in West Garfield Park, several blocks from the West End. He didn’t recall much about the place, other than that “it looked as if it had been closed since before I was born”.

His recollection was that the Cicero Avenue shopping district that included the West End was “slowly dying” in his time (1950s-1965), and that there was a lot of vacant business space when he lived there. Just down the street, at Cicero and Monroe, was a somewhat more memorable area landmark…the “Sky-Hi Drive-In”, a fast-food restaurant that had been made from a retired DC-7C airliner.

Aerial maps on historicaerials.com (?) show the West End. It was an L-shaped structure with a narrow, deep lobby connected to a rather plain rectangular auditorium with no stagehouse, exposed overhead trusses (probably no dome or balcony inside) and commercial/apartment structures along Cicero. By the last view (early 1960s), the roof was already looking pretty rough.

I don’t remember it being closed in the early ‘50s …I was still there and the neighborhood was nice, just on the cusp of change. We moved out in '58 I think…I spent a good portion of my life in that neighborhood and lots of good times remembered at the West End.

This opened on November 23rd, 1916. Its grand opening ad is in the photo section.