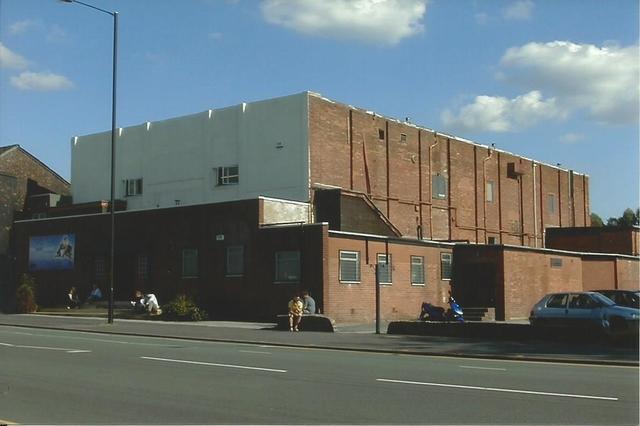 Located in Failsworth, mid-way between Manchester and Oldham to the north west; now part of Oldham but previously listed under Lancashire. The Grand Theatre was opened by 1914. It is listed in the Kinematograph Year Books (KYB) from 1927 to 1954 but closed after a period of live theatre use in 1958. Proscenium width 22 ft. Stage, 15 ft. 6 in.Four dressing-rooms. It was taken over by a church from 1959 to 2004. It then became a christian cultural centre. There was a serious fire [arson is suspected] in 2012 and the building had been demolished by 2014.

It was listed in the Kine Year Book of 1914 with 1,100 seats, by 1954 was reported as having 905 seats, two dressing rooms and a stage 16 feet deep with a proscenium 22 feet wide and was run by Ogden Theatres Circuit ( a small Manchester company running 11 cinemas) who seem to have owned it for a considerable time. It is also listed in Dobson’s Theatre Year Book 1948 – a live theatre directory – with 1,048 seats. There are reports that the theatre staged live shows on Sundays throughout the War. Offered ‘for sale’, together with La Scala Cinema in Hollinwood, in February 1958, it was purchased by the church of St Mary (The Immaculate Conception) whose 1845 building became unsafe and required rebuilding. The Grand was converted and consecrated as a temporary place of worship in 1959 and continued until a new church opened in 1964. The Grand then underwent a variety of uses including the Christian Cultural Centre. Seriously damaged by a fire in 2012, it was demolished not long after.