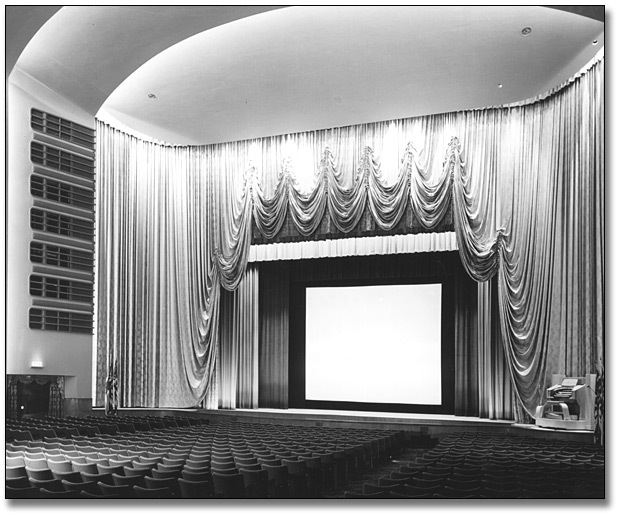 The Odeon Toronto opened 9th September 1948 with the North American Premiere of the Rank Organisation’s production of “Oliver Twist”, directed by David Lean and starring Robert Newton & Alec Guinness. British film stars Patricia Roc and Trevor Howard attended ‘in person’. It was described as the “Showplace of the Dominion”. It was an enormous theatre with two spacious lobbies on the main floor and another one on the balcony level. Up the magnificent staircase at the first landing was a restaurant overlooking the lower level. It was equipped with a Hillgreen-Lane 3Manual/19Ranks organ which was opened by Al Bollington.

It was part of the Odeon building which housed the offices of Odeon Theatres Canada. It’s name was changed to the Odeon Carlton in 1956, and it premiered some of the biggest films of the day. For years it showed reserved seat roadshow films such as “Lawrence of Arabia” and “Oliver”. It also was home of James Bond movies for several years and even had a few Cinerama movies starting with “It’s a Mad, Mad, Mad, Mad World” in 1963.

Sadly, in later years it could no longer attract the big crowds and it’s last attraction before closing in 1973 was “White Lighting”. It was offered to the city of Toronto for one dollar as a performing arts centre, but they passed saying it didn’t have enough room for a backstage area. It was a real loss for movie lovers and for the city of Toronto.

It was demolished later that year and replaced with an apartment building. Ironically, next door Cineplex Odeon opened a nine-screen art house, also called the Carlton, so the name still lives on.

There was an article about the Carlton in Boxoffice, May 1958:
http://tinyurl.com/ycdetly

The Humber Cinema will re-open Oct 29th 2010!
www.humbermovies.com – The site will be up soon.
More info coming soon! If only we could bring back the Odeon Carlton too!

Found this picture of the Carlton at City of Toronto archives.
This is a very good view of the marquee.

Hmm. Its amazing how great buildings are replaced by total mediocrity

A major article about this cinema (En Français) can be found in the November 1948 issue of the Architecture-bâtiment-construction. http://collections.banq.qc.ca/ark:/52327/2673612

I have a ‘GRAND OPENING SOUVENIR PROGRAMME’ for The Odeon Toronto which says September 9th 1948. Your info says 1949. Which is correct?

The program is in pristine condition

The below image dated the same was posted to the Photos section in 2012. So it likley did not got overlooked until now. The Overview now states the same date as your Programme.

The organ survives and is in storage at my house