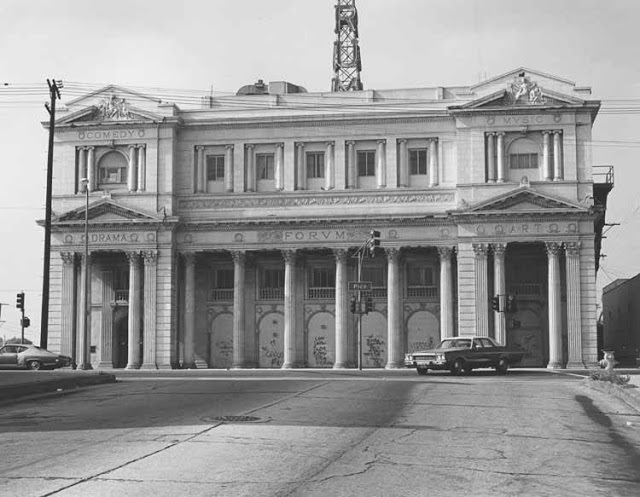 Located in the Mid-City district of Los Angeles, this originally opened as an independent movie theatre, and it quickly came under Warner Bros. Circuit Management. The Warner’s Forum Theatre was built when at a time when the surrounding neighborhood was still nice. The theatres' unique facade is the only one of its kind in Los Angeles and was probably designed after the marquee of the old Rivoli Theatre in New York (now razed).

Opened on May 15, 1924 with Lionel Barrymore in D.W. Griffith’s “America”(aka Love and Sacrifice). The Forum Theatre was described as ‘The Most Beautiful Theatre in the World’, and styled as its name suggests, it looked like a building from Ancient Rome. The facade is in a costly terra-cotta finish and has the name' Forum' over the pillared entrance, with ‘Comedy’ ‘Drama’, ‘Art’ and ‘Music’ set into the stonework on the two end bays. Originally there was a small plinth containing a fountain on the left hand side on the sidewalk, which had a Doric column, supporting a statue of a winged figure, holding one arm outstretched (now removed).

When first opened there was no marquee over the entrance, but Warner’s added one when they took over the building. A large ‘oil-derick’ style sky sign was on the roof, spelling out the ‘FORUM’ name in vertical neon letters. On left of the theatre was a very large 500 capacity, car park which had a Roman style arched entrance and portico facing the street (now demolished).

The lobby entrance was oval shaped and decorated in a Neo-Classical style fitting the rest of the building. Inside the auditorium, all seating was on one level, beneath a painted tented plaster ceiling. Elaborate painted murals by artist Christian von Schneidau depicting Roman garden scenes, ran along the side walls in large panels, which were broken by decorative columns, giving the impression of being seated in a tented room, with open sides overlooking gardens outside.

The square proscenium arch had no decoration, but on each side of it were convex columned curtained areas which served as side stages and held the organ chambers behind. The Forum Theatre had only a very small stage and was equipped with a stage house. The house curtain had a painted scene depicting a Roman ruin atop a hill. Located above the auditorium, was the Forum Ballroom and above that on the roof was an open-air cafe which had seating for 200.

The Kimball 4 manual, 37 ranks organ was one of the largest theatre organs ever to come from that manufacturer, and it had an 8 rank echo division with an extra set of swell shades that allowed it to be heard outside of the building! The organ only stayed in the Forum Theatre for seven years, as it was transfered to the new Warner Western (Wiltern) Theatre in 1931, where it remained until that theatre closed in 1979, mysteriously vanishing out the building!

After serving many years as a popular general release theatre for Warner Brothers productions, the Forum Theatre was closed in the mid-1950’s, and was taken over by Cinerama Inc. They installed the 3-projector system Cinerama into the theatre and used it as a test facility for their Cinerama film stock prints. The theatre was not open to the public for these screenings as it also served as a print testing and despatch building for shipping out Cinerama print copies to their other Cinerama theatres worldwide. Eventually this ceased with the demise of Cinerama in the mid-1970’s.

The building was purchased by Walgreen’s drug stores and converted into retail use. This use seems to have been short lived, as in the late-1970’s it become a Hebron Presbyterian Church, serving the local Korean community. There is now nothing decorative left inside the building from its cinematic past, only the magnificent facade remains to show what a beautiful & prestigious theatre building this once was.

I checked under Forum in 1954 and got a few hits, but no movie listings. Maybe you will have better luck.

This is from June 18, 1954:
THRILLER OPENS AT PARAMOUNTS
Destructive giant creatures who threaten to devastate the world take over the screens of both Paramount Theaters today with the opening of “Them”, science-fiction subject from Warner Bros. Filmed on location in the Mojave Desert and in the maze of storm drains under Los Angeles streets, “Them” stars James Whitmore, Edmund Gwenn, Joan Weldon and James Arness and reaches a climax as a horde of mutant monsters threaten to wipe out the city. Second feature at Paramount Downtown only is “White Hell of Pitz-Palu.”

They used a backlot instead of actually filming the last scenes downtown. I was disappointed.

Here is an item in the LA Times in September 1926:

Because of the work necessary in preparing the prologue for Rex Ingram’s production “Mare Nostrum” which is to be accorded its premiere performance tomorrow night, it has been found necessary to close the Forum Theater all day today and tomorrow afternoon so that everything will be in complete readiness.

“Mare Nostrum” is the picturization of Blasco Ibanez’s story, with Alice Terry and Antonio Moreno playing the leading roles. These two are supported by a cast of European players. The scenes of the picture are laid in France, Spain and Italy on the locations described by the author in his powerful story.

The article about the opening of the Forum Theatre that appeared in the August, 1924, issue of Architect and Engineer had this interesting information:

“Eighteen hundred people can be accommodated in the theater, while the roof garden, which has complete cafe service, has a capacity of 200 persons.”

Looking Google’s the aerial view of the building today I see no evidence of this roof garden. The building just has an ordinary roof, with no flat areas. Does anyone know what became of the vanished rooftop cafe? 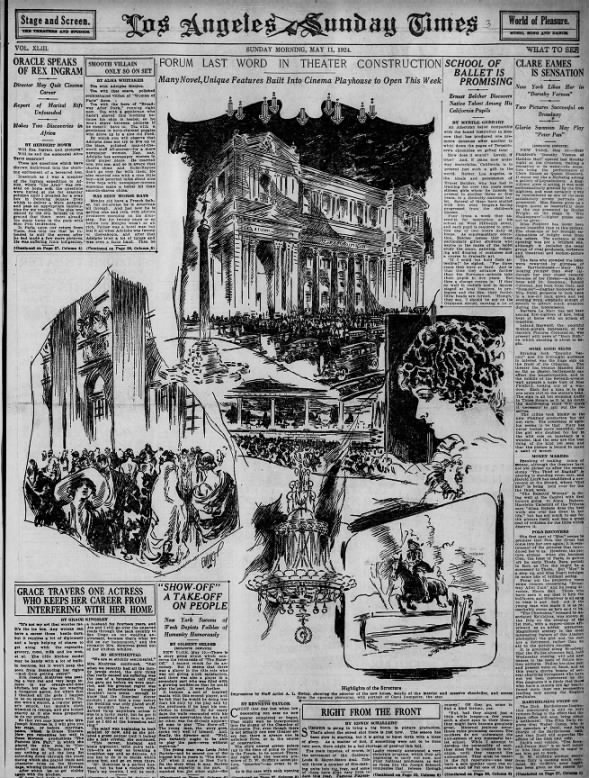