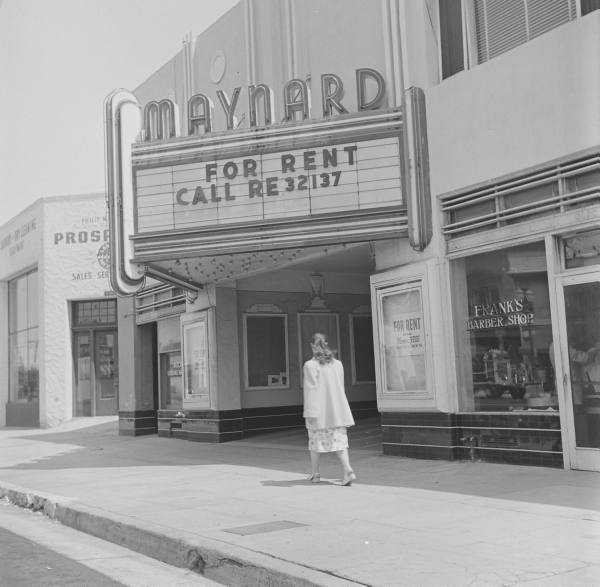 The United Arlington Theatre was opened in 1914. In 1921 it was equipped with a Robert-Morton organ.

Here is a classified ad from the LA Times dated June 5, 1929

This LIFE shot show that the Maynard was closed in 1951,
View link

Can anyone provide info on the KTLA Studio Theatre?
View link

The theater must have been called The Gem after the 1929 article posted above. This is from March 26, 1930 in the LA Times:

ROBBERIES CONFESSED BY YOUTHS
Six Drug Stores, Theater and Oil Station Declared to Have Been Held Up
Robbery of six drug stores, one theater and one oil station was confessed yesterday by Milton Wilkinson, 25 years of age, and Bert Slight, 21, both of 653-A Brooks avenue, Venice, according to Detective Lieutenants Heintelzman and Board.
The men were arrested on the 21st inst. by Officers Schmidt and Dorsey when they recognized the license number of the pair’s automobile as that reported by Joe Shea as having been on the car of two bandits who held him up in his drug store at 5851 West Boulevard on the 14th inst.
Identified by Shea, according to the detectives, the youths readily confessed and implicated themselves voluntarily in the other robberies. The theater hold-up was that of H.H. Hicks in the Gem Theater at 2488 West Washington Boulevard on the 16th inst.

What is the name of the theatre under whose marquee canopy raybradley’s second photo of the Maynard is taken from?

The letting of the general contract for the house that would open as the United Arlington Theatre was announced in the May 31, 1913 issue of Southwest Contractor and Manufacturer. Frank L. Stiff was the architect for the $15,000 project.