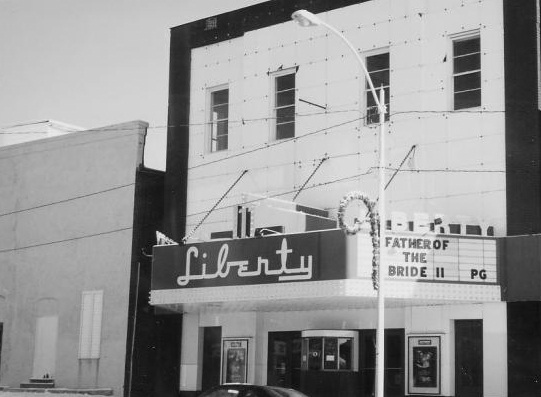 Originally opened about 1910 as the Dixie Theater in the former Illinois state capitol of Vandalia, this small, still-single screen gem of a movie house was remodeled in an Art Deco style during the 1930’s, when it was renamed the Liberty Theater.

Its vibrant Deco-style marquee is one of the theater’s most noticeable features, with the word ‘Liberty’ in stylized cursive writing, lit in neon and framed in lightbulbs. The Liberty Theater featured first-run films and occasional live acts until it was closed in early 2008.

On the Libery Theater website this morning, it states the theater closed due to damage roof.

this theater is closed and it will probably be closed for a while since it has new owners and they will be redoing it.

look what i found very interesting for the dixie theatre

THESE PROGRAMS ARE FROM 1925 AND 1926 LISTED ON EBAY
VINTAGE DIXIE THEATRE VANDALIA ILLINOIS PROGRAMS LOT
GLORIA SWANSON—REGINAL DENNY AND MANY OTHERS Item number: 180268935253

The “From the Boxoffice Files (Twenty Years Ago)” feature in the magazine’s issue of February 8, 1947, says that Harry Tanner had bought the Dixie Theatre in Vandalia from S.E. Pirtle.

The March 8, 1941, issue of Boxoffice Magazine reported on extensive fire damage to the Liberty Theatre building, with the total loss estimated at $80,000. The IOOF lodge on the third floor suffered $20,000 in equipment losses, and the building’s $20,000 air conditioning system was destroyed.

The theater was obviously repaired, but I’ve been unable to find a date for the reopening.

After looking at the picture ( 2010 photo) of this theater that Chuck posted on April 20, 2010, shouldn’t the status for this theater be changed to closed ?

Here are some pictures I shot of the Liberty Theater this Summer on a drive through Illinois.