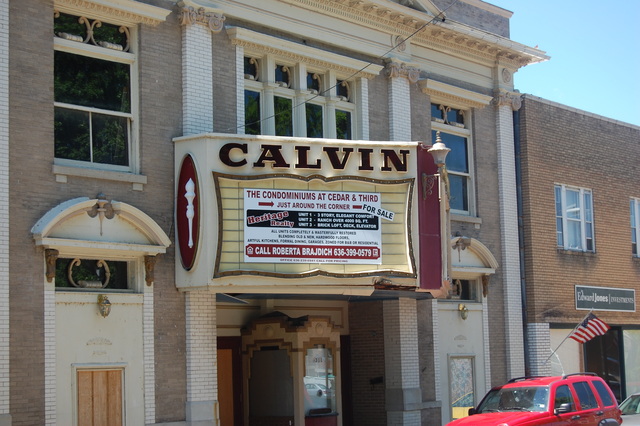 Opened September 5, 1909. The first movie seen at the Calvin Theatre was on September 17, 1909 after two weeks of live entertainment.

The designer of the building was E.C. Little. He was the architectual supervisor of the erection of the Missouri State Building for the 1904 World’s Fair. This was a 900 seat Theatre. The Calvin Theatre has gone through a lot over it’s years of business. Commonwealth Amusement ran the Calvin Theatre from the early-1930’s through 1983. In 1983 it was purchased by Mr. & Mrs. George McLean who also owned the theatre in Sullivan, Mo. They planned to restore the theatre to it’s opera-house appearance with some success.

The theatre’s present owner lives upstairs of the theatre and continues the Calvin’s bluegrass concert series and a few movie screenings. It had closed by April 2014. In November 2016 the marquee & sign was removed from the front of the building due to a possibility of its collapse.

Though I no longer live there, I saw my first movies at the old Calvin Opera House in the late 70’s and early 80’s. This was the only theatre in town at the time, and we lined up down the sidewalk and around the corner to see a movie. I saw my first James Bond movie staring a very young Sean Connery there. One of the last movies I remember seeing there was Sixteen Candles with Molly Ringwald and Anthony Michael Hall. By then, a new theatre had opened in town and eventually added several screens. I think that put the Calvin out of bussiness, or at least they quit showing first-run movies at that time. It’s a great theatre with a full stage and a balcony. I remember the large red curtains that opened when the movie started. I think it’s unique and wonderful that a town this size has such an historic building and great history which began in 1909. I can just imagine the live shows that actors and performers presented on stage before the age of movies came around. I imagine the seats on the ground floor as well as in the balcony were filled by people laughing and enjoying Vaudville acts. I’ve seen other theatres of similar style only in large, old cities with a rich history. In St. Louis, a few places come to mind: The Shady Oak in Clayton, The Kirkwood, and The Tivoli in University City – all beautiful old theatres built long ago when St. Louis was a thriving city. I believe Shady Oak and the Kirkwood stopped showing independent films years ago when the corporate Landmark Theatre came to Plaza Frontenac. I’m curious how someone came to build the grand Calvin Opera House in a small town 50 miles away from St. Louis?

I heard the Calvin is for sale. Is this true?

Nice to see thats its still being used after all this time.

Neat article on the Calvin: