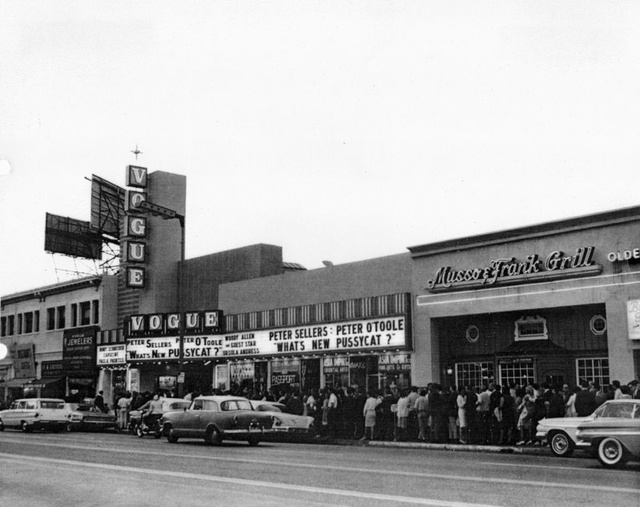 Designed by noted theatre architect S. Charles Lee, the Vogue Theatre opened on July 9, 1935 with Ivor Novello in “The Phantom Fiend” (a talkie version of Alfred Hitchcock’s “The Lodger”). It had a seating capacity of 897, all on one floor. The Vogue Theatre was run by Fox West Coast Theatres from July 10, 1945 and was modernised in July 1959 to the plans of architects J. Walter Bantou & J. Arthur Drielsma. Mann Theatres took over in the early-1990’s.

Legend has it this theatre is haunted by a former projectionist, named Fritz, who once worked at the theatre.

The Vogue Theatre closed in around 1995 and for a short time was used as a theatre for psychic performances. It then had occasional use as a film location space. In December 2001, the theatre fittings were stripped out and sold off.

In 2009, the building was fitted out as live performance space named the Supper Club, which caters for an adult audience. It was closed October 30, 2015. By spring of 2018 it was operating as a museum displaying Hollywood artefacts. By fall of 2021 it was the Vogue Multicultural Museum.

Born and raised here and I can’t believe the tree comments LMAO I thought I was the only person very annoyed by them wow! As for this place like everything else here has turned to garbage!

@PDDET LOL You tell them cause that is so true there was never a damn Fritz there glad I saw this now I can tell people I told you!! LOL

Anybody know what the news is for the Vogue now? I know the supper club moved out. At the very least it should be marked as a landmark. Many a great picture premiered there. “Bonnie & Clyde” being a more famous title.

Was this the only LA house that would take a roadshow bomb like The Big Fisherman. All the others being ‘You’ve got to be kidding.’

So apparently this space is now used for small Hollywood artifacts museum. They give tours every 5 minutes or some such sell. The marquee has been updated to display in all LED light, much like the Ritz/Pussycat/World Continental Theatre across the street. I will post more information when I can get my claws inside.

YouTube video of the Vogue and surrounding area mocked up as 1969 for filming of the new Tarantino film. Vogue portion starts around the 1:48 mark.

I was assistant manager at the Vogue Theater during the films “What’s New Pussycat” “Shot in the Dark” “Kiss Me Stupid” “Tom Jones” etc. Those were the days.