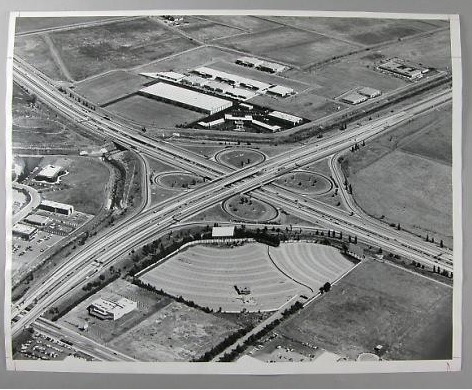 Opened on August 12, 1968 with Debbie Reynolds in “The Unsinkable Molly Brown” & Tony Randall in “7 Faces of Dr. Lao”. It was a single screen theatre and the San Ramon Auto Movie was located off of Dublin Boulevard, adjacent to the 580/680 interchange. The drive-in was easily the most high-profile entertainment venue in the Tri-Valley area during the late-1960’s to the mid-1970’s. The land was owned by the Enea Brothers, who also owned drive-ins throughout the Bay Area. On June 16, 1971 a second screen was added.

During the late-1970’s to early-1980’s, attendance lagged due to the construction of several multi-screen indoor theatres in Dublin and Pleasanton. Dublin incorporated as a city in 1982, and the drive-in sat in a high-profile traffic area. It closed in 1981 and was demolished in 1982, and was developed into a series of retail shopping centers, and most recently, car dealerships.

Nothing remains of this theatre, save for a few of the trees that lined the back of the screen and former driveway. Amador Valley Boulevard south of Dublin Boulevard was originally the entrance, which is now paved and riddled with stoplights.

The Enea brothers also owned the following drive-ins, now gone: Nimitz Auto Movie (a two-screener in Fremont, CA) and the Fremont (CA) Automovie. They also owned for a number of years the Showcase Theater, an indoor house, in downtown Concord, CA.

The San Ramon Auto Movies started as a single screen; a second screen was added to the southern part of the drive-in around 1972 (along westbound Hwy. 580). A simple, waist-high cyclone fence with wood staves separated the two screening areas. The perimeter of the drive-in was encased in a green and white corrugated fiberglass fence. Cartoon character likenesses (Porky Pig, etc.) dotted the fence occasionally. Some of the speaker holders came equipped with heaters.

R-rated movies seemed a rarity at this drive-in; family movies like “Adventures of the Wilderness Family” and “The Life and Times of Grizzly Adams” were staples. Sometimes R-rated movies like “Walking Tall” and “Linda Lovelace for President” played here, but the San Ramon Auto Movies definitely had a family atmosphere (a playground was located next to the snack bar).

Updated 12/10/2014 – according to the August 11, 1964 edition of the Oakland Tribune, the San Ramon Auto Movies had its grand opening the following evening (8/12/1964) with a showing of “The Unsinkable Molly Brown” and “The Seven Faces of Dr. Lao.” The newspaper ad notes the drive-in was situated on Dublin Blvd. at Highways 50 and 21, though it was actually ½ mile east of that intersection (Dublin Blvd. and San Ramon Rd.) The San Ramon Auto Movies opened about a year before the adjacent Interstate 580/680 interchange. 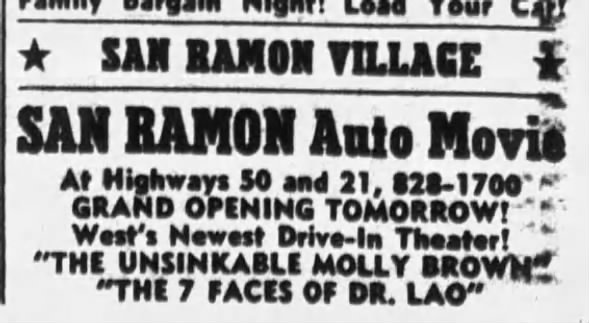