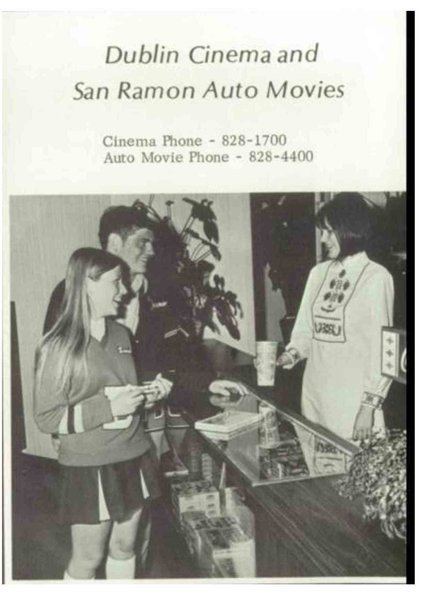 Opened March 26, 1969 with Richard Burton in “Where Eagles Dare”. The Dublin Cinema opened as a single screen theatre. On June 2, 1972 two more screens were added. The Dublin 6 Cinema was a fantastic theatre. The auditoriums ranged from a rather large one to a small 80 or so seater. The seats and decor ranged from gold and brown, to red, green, and blue. But what really made this theatre was it’s lighting. In the main auditorium were orange screen lights with only red recessed square fixtures on the ceiling. Very dark. During intermission the red square lights changed over to white lights so the staff could see to clean the auditorium. When they were done cleaning, the square fixtures were changed back to red lights. (Must have been two bulbs - one white and one red in each square recessed fixture). Three other auditoriums also featured the orange screen lights.

I worked at the Dublin Cinema (1985-1997) and managed it for part of that time. It was a great theatre with a lot of character. It was known for having a friendly helpful staff. It was hard to see it torn down, since I remember going there as a child (the drive-in too). It was a pleasure working for the Enea family.
Vince Halter

Hi Folks:
I worked for the Enea family but over in Belmont at the Belmont Cinemas 3. I did visit the Dublin 6 a couple of times. It had a strange hall way leading to the different auds that twisted left and right as though you were going through a maze. I seem to recall every aud being completely different with different styles of seats, wall drapes etc. To bad they tore it down.

A fantasic theatre in a great location, it was a regular haunt by myself and my sisters during our childhood. The lines would often pour out of the small lobby into the parking lot. In later years, a second entrance and small concession was added on the west side of the building. When the adjacent San Ramon Auto Movies was twinned, the second screen projection was shot out of the back of the indoor. I always prefeered this theatre to the GC location across the street. While it was older and a bit more run-down, it had a lot more charm.

With regards to the Belmont Cinemas 3, that theater is now a carpet store. I remember it when it was a theater that had one side showing mainstream films and the other side(as the Bel-Art) showing arthouse fare.

Does anyone have any photos, interior and exterior, of the theatre?

I remember this theatre well. I saw Return of the Jedi here in 1983 and Terminator the next year. Nearby was Dublin Place 6 in a shopping center with a Montgomery Wards and a Gemco. Anyone have any info on it? That’s where I saw Raiders of the Lost Ark, Temple of Doom, ET, and Krull among others.

I used to see movies here all the time before the Galaxy opened, then only very rarely afterward. It had a nice, old-time cinema feel to it. I vaguely remember going on a field trip and being able to look at the projection rooms (I think there was a spiral staircase?) and seeing An American Tail. It seems like I saw a lot more movies at the GCC Dublin Place across the street, which was all gray brick and more utilitarian than this one. But they are both long gone now.

The Oakland Tribune, dated March 24, 1969, indicates a grand opening for the Dublin Cinema on 3/26/1969 with the film “Where Eagles Dare” starring Richard Burton and Clint Eastwood.

From the “Hayward Daily Review” I found the following information. The Dublin Cinema’s second and third screens opened on Friday, June 2, 1972. Screen #2 featured Woody Allen’s “Play it Again, Sam” and Screen #3 had Shirley Maclaine’s “The Possession of Joe Delaney.” For some time after, Screens 2 and 3 featured PG and R-rated films, while the larger #1 auditorium ran Disney movies and other family fare (Disney’s “$1,000,000 Duck” and “The Biscuit Eater” played that weekend on the #1 screen).

New photo of the theater in the photos section…