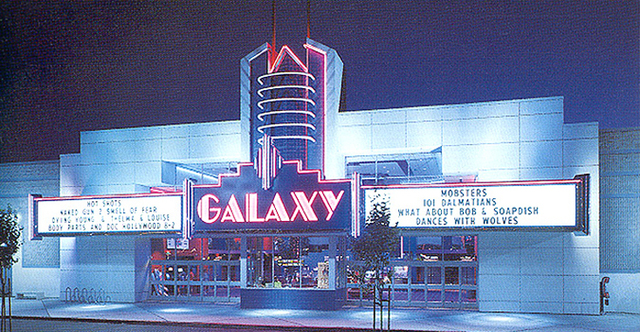 This multiplex opened in the Rose Pavilion shopping center in the late 1980’s. Regal took over operation in 1998. Operated as a first run theater. When the nearby Regal Hacienda 20 opened across 580 in Dublin, Regal attempted to keep life into the theater by showing art fare. Less than six months later, the theater closed in 2002. It has since been demolished and a furniture store built in its place.

Nice little multiplex. Saw almost every movie from “Ace Ventura” to “The Mask of Zorro” here.

The sound in some of the theaters was better than others.

Turned into an indie theater but, lo and behold, the snobs of Pleasanton weren’t into that and liked Regal in the new Dublin location a lot better. Besides, who wants to see indie stuff when you can travel 30 minutes on BART to SFO or 30 minutes in a car to San Jose and see that stuff?

One update: the theater was completely demolished a few years ago and a new furniture store was put up (1 of the 1,000’s in Pleasanton).

I remember when my cousin, who is now 14, was considered old enough (about 5) by his parents to go to a movie, I had planned to take him to see the re-release of “Star Wars,” at Oakland’s Grand Lake, so even though he would clearly be growing up in an era of megaplexes and home entertainment, he could look back and remember seeing his very first movie in a grand old theater. His parents, my older cousin and her husband, forgot that this was my plan, and took him to see it at the Galaxy. He later made the very logical (for a 5-year-old) observation that it made sense to see the movie at the Galaxy, since the movie itself took place “…in a galaxy far, far away.”

A few weeks later, it was plain to them that one viewing of this movie was not going to satisfy him, so for his second time seeing it, we made it a family trip and all went to the Grand Lake, where he was indeed taken with the look of the place.

When the Galaxy first opened, it was awesome to have a theater that was new and state of the art, for the time anyway. And it was convenient to have a theater in town rather than driving to one of the cinemas in Dublin. Saw many, many movies here with friends and family, lots of great memories. The last movie I saw here was Austin Powers 2 in June of 1999, back when matinees only cost $4. I’m sad to hear it’s been demolished. Despite competition from the new theater in Dublin, the Galaxy might still be around if it had had stadium seating. Seems like someone tall always sat in one of the rows in front forcing you to move or try to watch the movie with their head in the way.

I’m not one to usually say this about multi-plexes, but this one ACTUALLY looks like a Kohl’s if you take the marquee down.