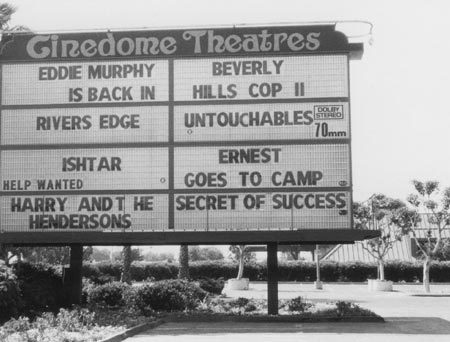 I recall seeing “Close Encounters of the Third Kind”, “Hot Stuff”, “The Black Hole”, “TRON”, “Back to the Future”, “Total Recall”, and other films there.

A terrific theatre which closed on January 6, 1999. It never should have been closed or demolished, but it was, in favor of a modern multiplex built not far on the site of the former Stadium Drive-In.

Cinedome-Orange did not open with four screens as indicated above. As shown in the grand opening ad in the photos section for this theatre, it opened in 1969 as an enormous twin, with, approximately-speaking, two 900-seat domed ampitheatre-seating auditoriums (neither of which was ever divided for the life of the complex). Each of these two original, giant domes was as big as or bigger than the Cinerama-Hollywood. In 1974 two large, conventional houses were added (one 600-seater, the other 400). In 1977 two medium-sized domes, again with ampitheatre seating, were added (each around 400-seats). In 1986 two more conventional houses were added (also around 400-seats each). Finally, three more domes were added in 1992. At just under 300-seats each, these last three were “small” only when compared to Cinedome’s other auditoriums (each would’ve made a nice main house in any normal multiplex of the time). The total capacity for this 11-plex was around 5600. Cinedome-Orange’s box office and snack bar grosses were staggering (among the highest in the country). Five of the houses had 70mm capability: Four 70 projectors were from the original twin (from the pre-platter/changeover era when each screen required two projectors) and one 70 projector was brought over from City Center (after it was acquired by Syufy/Century). 70 was run frequently—in both domed and conventional auditoriums (along with all of the latest digital sound formats of the time).

Please update, theatre closed January 6, 1999. It the later years it was discount theatre. Final display ad posted. It became a discount theatre November 21, 1997 when the Stadium 25 opened by Angels Stadium.

Widely considered the greatest action-adventure movie ever made, it became the highest-grossing film of 1981, introduced the world to Indiana Jones & spawned three sequels (with a fourth on the way), not to mention kept all us Star Wars fans busy between The Empire Strikes Back & Return of the Jedi.

I saw Raiders at the Cinedome with my dad & it’s one of the best memories I have of spending time with my old man.

Here’s a new 4-page 50th anniversary FIDDLER ON THE ROOF retrospective featuring a roadshow playdate chronology and historian Q&A. Cinedome’s year-plus (and venue record) run is mentioned in the piece.

Here’s a clickable link to the RAIDERS OF THE LOST ARK retrospective article that was mentioned a few comments ago.

I can’t be the only Cinema Treasures member who wishes the Cinema Treasures crew would “strongly encourage” commenters make their links clickable. It’s not difficult: Simply type out within brackets how you wish the link to read and then paste the URL within parenthesis that follow the brackets.

I skip right over comments that include an un-clickable link (and I bet most members do the same). So I imagine links to articles will get read more often if they’re clickable.

Thanks for the tips on clickable links, Michael. I’ll try & remember the process.

I’d like to “strongly encourage” Cinema Treasures to make links clickable once you copy them, as most other websites do. Members shouldn’t have to write “code” every time they add a link.