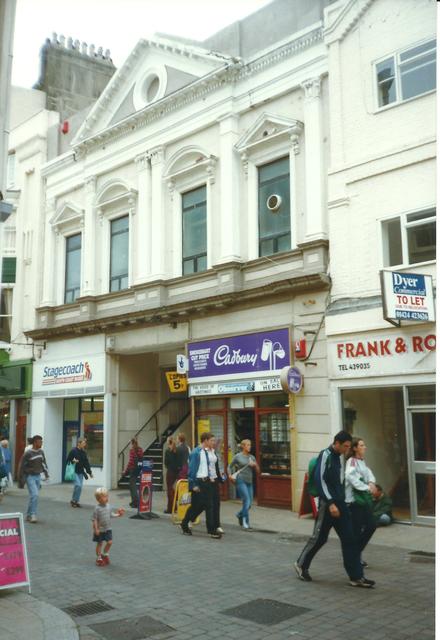 In Hastings, East Sussex, during the autumn of 1910, local catering company Atkins Bros. & Cox took over the lease of the Upper Central Hall in the Bank Buildings and converted it into a cinema, complete with a raked floor, which opened on Tuesday 1st November. The Central Picture Theatre was open every day, including Christmas Day, but excluding Sundays. Tea and biscuits, served at all performances, were free between 4.30pm and 5.30pm.

The Central Picture Theatre never had its name up outside, nor did it have any front doors, as such, there just being an iron gate that was locked at night. Antiquated wooden steps led up to the pay box. The projection box was a small concrete room built on a wooden platform.

The Central Picture Theatre was ordered to close in 1925 by the local Fire Brigade on the grounds that there were not enough exits. The old wooden steps were also an issue. Closure came on 30th March, after a screening of “A Pictorial Tour Through Canada”.

During World War II the Central Picture Theatre was used for storage and as a shelter for those made homeless due to bombing. In 1946 it enjoyed a brief life as a children’s theatre. More recently it has been used by the Elim Church, then as an advice centre for the homeless and unemployed. Attempts in the 1980’s to reopen it as a cinema were unsuccessful.

Link about the Central Picture Theatre, Hastings, from my own Facebook page called Cinemas and Theatres of Sussex.