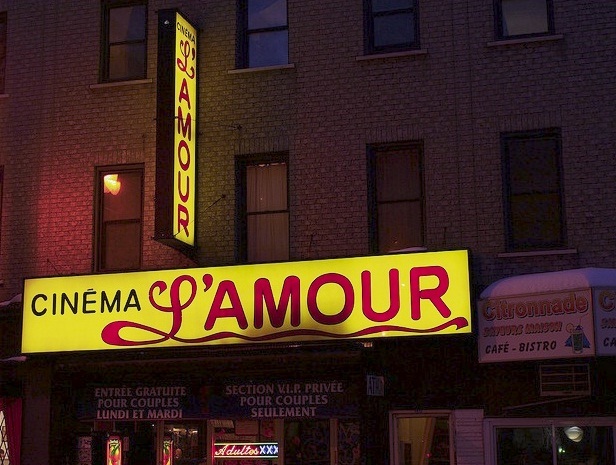 October 15, 1914 as the Globe, this theatre was a neighbourhood house and sometime Yiddish plays were performed there.
Timeline:
* 1932 renamed as Hollywood.
* 1965 renamed as Cinema D' Orsay
* 1969 renamed as Pussycat started adult programming
* 1981 renamed as L'Armour,

this is now the last adult cinema in MontrÃ©al.

‘Boasting the largest triple-X screen in North America, this revered palace of pud-pulling on St-Laurent and Duluth St. has been packing in porn-loving customers into seats since the late 1960’s (named at the time the PussyCat). Renamed L'Amour in 1977, it has since undergone extensive renovations, most recently the addition of the balcony couples’ lounge. Despite the carpet being stained from spilled drinks and cigarette burns and littered with bunches of Kleenex (available at the concessions stand in the lobby), the actual architecture remains a beautiful, if run-down, neo-classical mixture of ornate mouldings and Ionic columns. Appropriately, L'Amour has a rich history: it opened in 1880 (??) as the Globe, a vaudeville theatre, and is rumoured to be the site where Harry Houdini received his fatal blow from a McGill student in 1926.‘ (Houdini later died in Detroit from a ruptured appendix caused by the severe punches to his stomach)

I have attended this theater on a few occassions and must admit it is a great establishment.
It’s great to have a place where you can go in, relax and relieve a little tension.
The price of admission is decent at 8$, However for nearly the same price you can buy a previously viewed film of the same rating at super club videotrons around the city.
It’s location is easily accessable, but located on a very busy street of montreal, wso hen your going to enter the place anyone on the street see’s exactly what your going into, and more often than not may let off a sniker.
The seating is confortable and arranged nicely.
My main complaint would be the fact that some other people in the theater can become annoying, What i mean by this is often many individuals are walking around checking the place out, although they are doing it on the side aisles and dont disrupt your view they do become annoying at times. Plus often they will be scoping out a place to sit and may end up disturbing you while in mid enjoyment, For example once i was there, and the theater was certainly not packed, perhaps 100 people there, I was alone in a row, and the row in front of me and back of me was empty at the time, instead this person decides to come and sit beside me, which disturbed me and caused me to move to establish a comfort zone, sometimes they sit right behind you as well, I know i sound picky however it often seems intentional since there is so many other empty seats to choose from.
I would certainly reccommend the theater to anyone, especially those who may be shy to go and buy or rent porn. Or those who have just turned 18 and would like to check out a X rated establishment.
The city may have many strip clubs, but more often than not your cover charge is 8$ and then you’ll have to buy a overpriced drink, and possibly not even touch the girls, so going to this theater would be much more enjoyable and money smart.

I see from the website (posted above by edward on Oct 22, 2003), that the upper balcony is now used as a ‘Private VIP’ section, where you can watch the movie from a private box or on loungers located on 3 levels. Obviously the best place to see the movies without having others invade your ‘comfort zone’.

hi i was wondering how couples friendly this thearter is , and if anyone had any ifo on this

November 28th, 1969 grand opening ad has been posted here. VAMP is the name of the cat in the logo, which means Very Adult Motion Pictures.

This reopened as L'Amour on July 31st, 1981. Grand opening ads in English and French has been uploaded here.