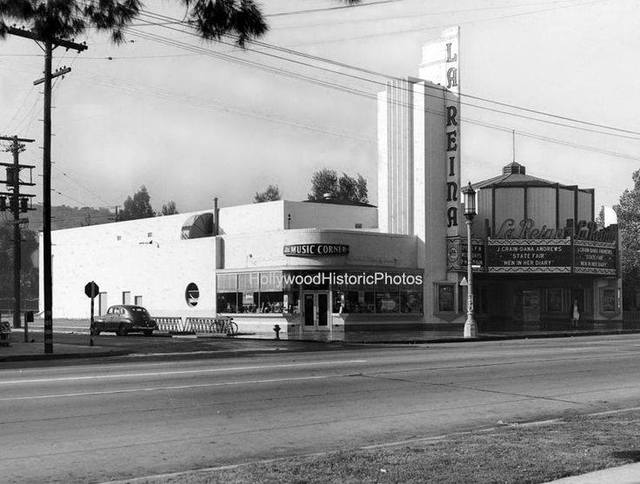 Designed by S. Charles Lee in 1937 for the Fox West Coast Theatres chain, the Le Reina Theatre was one of the nicer medium-sized movie houses in Los Angeles. It opened in 1938 and all seating was on a single floor. Later, it was operated by National General Theatres and finally purchased by the Mann Theatres chain, who continued to show first run movies at the theatre and in the early-1980’s it was equipped with 70mm projectors. It closed around April 1984 with a special screening of “There’s No Business Like Show Business” starring Ethel Merman.

At that time, Mann Theatres sold the theatre to developers who wanted to use the theatre’s lot for a new shopping mall. Such stories usually end sadly, but as a slight concession to preservationists, the developers were forced to save the theatre’s façade, although the auditorium was demolished.

After the 1995 Northridge earthquake, the vertical tower was damaged and had to be removed, and today all that remains is the marquee, the ticket booth, terrazzo sidewalk floor, and the façade of the building.

Here the theater is being used for retail, before the spa:
http://tinyurl.com/rx6s6x

Here is part of a February 1985 article from the LA Times:

Developer Dennis Bass has agreed to try to preserve the neon marquee of the 46-year-old La Reina Theater in Sherman Oaks. The proposed demolition of the theater has prompted some community opposition.

Jackie Brainard, a spokeswoman for Bass, said Thursday that the developer has consulted with the theaterâ€™s architect, S. Charles Lee, and hopes that he can incorporate the marquee into his proposed project at Ventura Boulevard and Cedros Avenue. Bass is planning a complex of retail stores and restaurants.

Bass, who is in the process of purchasing the theater from the Mann Theatre Corp., met Thursday night with representatives of the Sherman Oaks Homeowners Assn. to discuss his plans and seek community response. The strongest opposition, however, is expected to come from a group called Save the La Reina, headed by Sherman Oaks resident Lee David. David has filed an application with the cityâ€™s Cultural Heritage Board, asking that the art deco theater be declared a historic monument.

David said his group will lobby to have the building maintained as a movie or performing arts theater, or developed into a restaurant and retail complex with the exterior left intact. Brainard said that Bass has consulted with his architects and does not believe that it would be feasible to incorporate the theater building into his project.

Nice photos of the LaRenia.

A good daytime photo dated Sept. 2008 has just been posted in the Wikipedia article for Sherman Oaks. See this URL: View link

The marquee of this theatre (and possibly the interior) appear in the “Fire Man” episode of “The Greatest American Hero.” They are the scene of an arson that figures in the story line.

Wonderful photos of the La Reina Theater, enjoyed working there in 1965!

Just in case anyone’s interested, I was there on the second day of demolition. I was lucky enough to get a few items from La Reina’s projection booth back in the mid-1980’s. I wanted to build a movie theter in my home and use the items but that never happened. If anyone is interested, I’m selling them on Ebay – auctions end April 1, 2013. My Ebay seller name is “MuddyPartsOffroad” – One auction link is http://www.ebay.com/itm/261191035180?ssPageName=STRK:MESELX:IT&_trksid=p3984.m1555.l2649