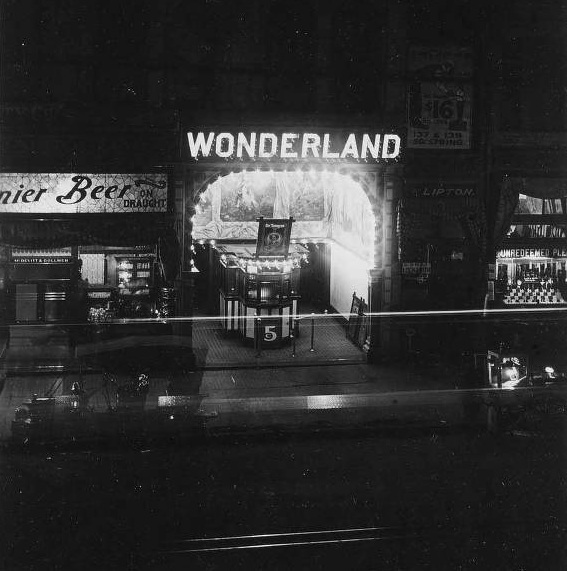 This theatre can be glimpsed briefly in the film “Black Belt Jones” (1974) as Sydney is driven from the funeral. The car travels north up Main Street; the Jade is on the left side, just before 3rd Street – the Linda Lea can be seen at the end of the scene as they continue driving.

Apparently, this theater was originally on Broadway and then moved to Main and was called the Wonderland Theater:

December 26, 1909
The following items are from the Southwest Contractor and Manufacturer. A.C. Martin is preparing plans for a one-story brick
theater building 32x120 feet, to be erected for the owners of the Wonderland Theater on South Main street. It will have a stamped metal front, marble lobby with tile floor, and cement floors in auditorium. The cost will be about $20,000.

September 09, 1921
FIRE IN THEATER
‘Crowd in Near Panic as Flames Burn Cinema Operator'
While attempting to smother a blazing roll of film which caught fire from the heat of a projector in the operating room at the Wonderland Theater, at 315 South Main street early last evening, Milton Guion, age 23 years, the operator, was severly burned on the arms and face. A near panic was caused in the theater when the flames spread from the projector to the interior of the operating room. Many persons rushed to the street. Chemicals quickly subdued the blaze. The fire damage was nominal, but the crowd blocked traffic for more than twenty minutes.
Los Angeles Times

I think it is the Liberty:

OK, thanks for the tip.

Did the Jade building replace the Wonderland building, or was it just a change of names? Any info on this?

I happen to come across some old police reports and rap sheets during an archive search. I saw some of men that were arrested at the Jade for engaging in homosexual sex. I assumed that at one time in the Jade’s history it must have been a gay “cruise” spot, or a place that gay/bi/straight men felt comfortable to meet other men.