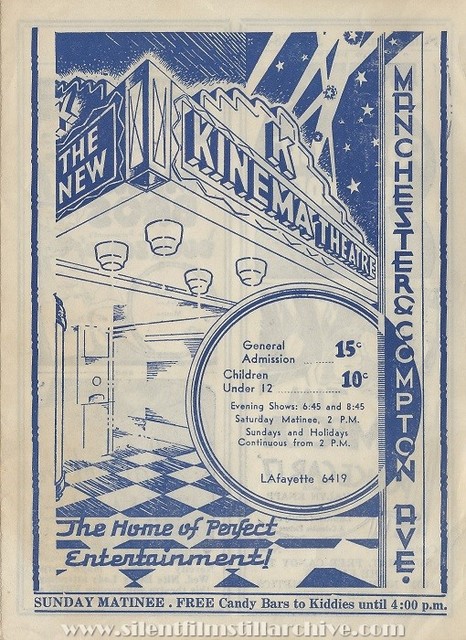 The Kinema Theatre was located in the Florence-Graham area of Los Angeles. It was opened in January 1925 by West Coast Theatres. It was equipped with a Wurlitzer theatre organ. By 1950 it was operated by Eastland Theaters Co.

I suspect this theatre has nothing to do with the larger Kinema/Criterion Theatre that was once in downtown LA.
If this is the neighborhood theatre I think it is, it is in the unincorporated area of LA known as Florence-Graham. The Compton Avenue address shown above is not in downtown LA.

The big downtown Kinema/Criterion Theatre had a 5m Robert-Morton organ built in nearby Van Nuys, CA. There seems to have been an ownership connection between the downtown LA Kinema and the Kinema Theatre in Fresno, CA. The Fresno theatre also had a 5 manual Robert-Morton organ.

The question remains as to whether this small theatre was associated with the larger Kinema/Criterion in downtown LA. Does anyone know if this theatre or building still exists?

Ah, so the Florence district Kinema IS listed here. I checked the 2004 Urban Areas map for the theatre’s address at Microsoft’s Terraserver, and though the site is being fussy tonight and won’t give me a full image, it’s clear from what displays that the theatre building must be gone. It would have been on the west side of Compton just south of Firestone. The old buildings on that corner appear to have been demolished at some time in order to straighten out a jog in Compton as it crosses Firestone.

Very interesting Joe. A couple nights ago I “googled” Graham, CA and without any hesitation it came up with Florence-Graham. I suspect it was named for the intersection of the east-west Florence Ave and Graham. (Go far enough west and you will be on a runway at LAX!)

I used the “map” provided for on this website and clicked on the satellite view and got to the intersection of Firestone and Compton.
The SW corner is where the map arrow insists 8607 Compton Ave is/was.
From the aerial view, it looks as if the entire block was leveled and two new buildings with lots of blacktop surrounding them now exists on the site of the old Kinema. This is certainly the theatre
where my little 2 manual 3 rank Wurlitzer came from, mentioned above.

There was another theatre in the area that, according to the Wurlitzer shipment list was called the Graham Theatre. That theatre had opus 860 a style B 4-rank job that was repo'ed and sent to the first Hanford Theatre in Hanford, CA (later transfered to the new Fox Hanford Theatre in 1930.)

I am going to put an entry on the CT website on the Graham Theatre and see what pops up.

Tom: The PDF file to which I linked on the Bush Theatre page said that the name Florence was used for the northern part of the area as early as 1869, when it was used for the Nadeau Street station of the Los Angeles-San Pedro Railway.

The name Graham was originally applied to a station located at Manchester Avenue on the Pacific Electric’s L.A.-Long Beach route, which wasn’t built until decades later. The station and the frontage road along the railroad route were named for a P.E. railroad employee.

It seems likely that the Graham Theatre was, like the Kinema, located in that business district along Manchester east and west of the station. My memory of the area is very dim, but I believe Graham Avenue was almost entirely residential in the 1950’s, with a few short stretches of light industry.

Thanks for the address. Even though the building no longer exists
(judging by the aerial photos of the corner), it would be nice to know where this once was. I am just about to get startd on the construction of the chamber here at my home for the Kinema’s Wurlitzer.

Pausing frequently to regain her self-control, Mrs. Hazel Lorette yesterday testified before a coroner’s jury to facts that led to the fatal shooting of her husband, James Lorette, 44, as he attempted to prevent the burglary of a theater last Friday.

Her eyes filling with tears, Mrs. Lorette recounted how she and her husband were awakened by the sounds of breaking glass in the theater below their apartment at 8609 Compton Avenue. “My husband got a .25-caliber automatic from a living room drawer and then went to investigate. I saw him walk down the street and then cry out "Come out with your hands up'. A voice answered, ‘All right, we’re coming’, then I heard two shots. I saw my husband stagger and fall to the ground, then I heard two more shots”.

This theater was indeed at the SW corner of Compton ave and Firestone/Manchester. Charles Drew middle school is at the NW corner where a carnival type amusement park once was. I believe the theater was demo’d in the late 70’s. Although I don’t remember going to this theater (I’m 57), My parents told me we once went and I “pooped” my diaper ther!

Here is a 1952 aerial photo. You can see the amusement park on the northwest corner and the theater on the southwest corner.
http://tinyurl.com/yb9u4oz