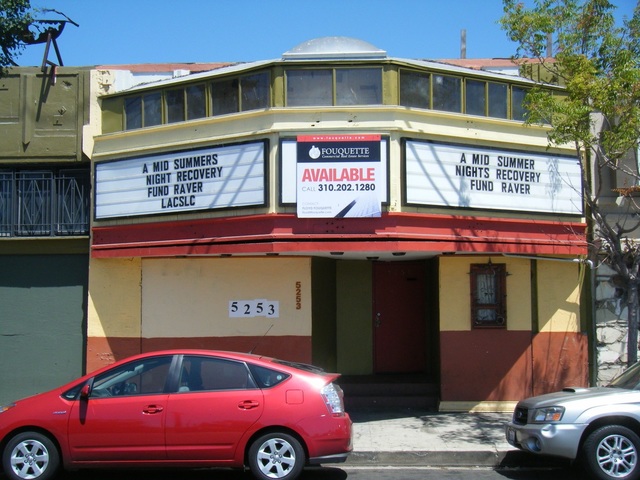 The Variety Theatre was opened on January 30, 1938 with Claude Rains in “They Won’t Forget” & Eddie Cantor in “Ali Baba Goes to Town”. The former Variety Theatre now houses a nightclub.

It’s confusing – the marquee advertises the acts for Fais-Do-Do, which is the building on the corner, but to the best of my knowledge, no actual club activity goes on in the space where the marquee stands. Perhaps both are owned by the same party, and the actual theatre space is used for private storage or office space?

I went inside recently – as during the summer it us used as a kids art camp. It seems to be housed like a black box theatre now. Didn’t get a very good look. No doubt though, from the architecture and the cozy, intimate and narrow hallway, it was a small neighborhood house in the 30s and 40s.

Facebook page for the current tenant, Fais Do-Do Cafe. It has some video of the interior in the comments.

This theater is first listed at this address in the Los Angeles City directory of 1939. It is not listed in the 1938 directory.

Not that it really matters, but the exterior of this theater was used for the scene when Emma Stone performs her one woman show in “La La Land:.

I don’t know if anyone else has noticed this or not (and not that this really matters either), but someone has tagged the Variety Theatre building on Google satellite view with the name Vaud and the Villains, which the Internet tells me is a traveling orchestra and cabaret show (here is their web site.) Aside from the troupe having performed two shows at the Fais Do-Do in 2016, I can’t find any connection between them and the theater. Might they be using it for a rehearsal hall?

And this is interesting too: looking at Google street view of the theater I noticed a hand-made sign reading “David Sukonick Concert Hall.” Sukonick Concert Hall has its own Facebook page, but there haven’t been any posts since February this year, and none earlier than January 11, 2015, and there are only three posts altogether, all of them posted by people appearing at the venue, so whoever actually runs the place obviously hasn’t yet claimed the page. I don’t think we should change the name of the theater’s page based on this scantly information, though.

The only David Sukonick I can find on the Internet is a professional dancer who now designs and builds floors for dance studios through a company called Bolo Productions. Maybe he has something to do with this theater, and maybe he doesn’t. The web site isn’t telling, as far as I can discover.

Also also interesting (to me, at least, though not theater-related) is this interview with David Sukonick at Danse Track, though it might be boring for people who aren’t interested in dance (or construction.)

The interior was featured on tonight’s episode of NBC’s “This Is Us”, as the club where Kate has her first singing gig. Fais Do Do was in neon on the wall.