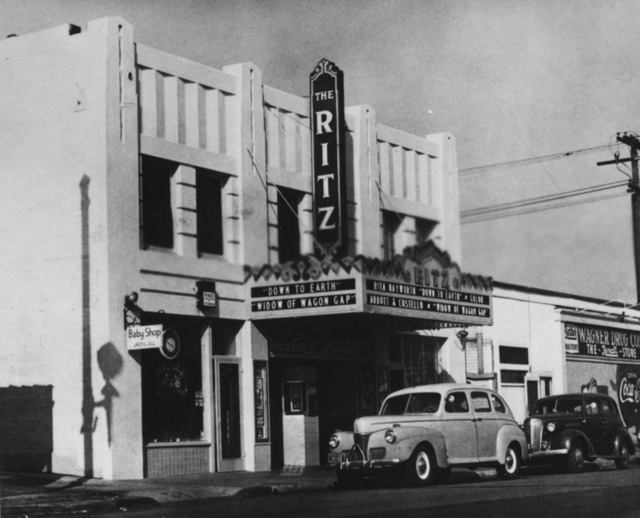 One of many neighborhood theatres that once was part of Long Beach’s movie going. The Ramona Theater was opened on November 28, 1924 with Viola Dana in “The Heart Bandit”. It was equipped with a Smith pipe organ. In January 1931 it was renamed New Redondo Theatre. It was renamed Ritz Theatre on May 1, 1933. It was destroyed by fire December 12, 1951, the final movie screened was Red Skelton in “The Yellow Cab Man”.

I just made the same mistake. What’s the emoticon for banging my head on my desk? No more Ritz pictures from me.

Here is a story from the Long Beach Press Telegram about a fire that destroyed the Ritz on 12/12/51:

A two-alarm fire plunged the Ritz Theater, 681 Redondo Ave., into a blazing showplace early today, leaving “only the four walls and the candy vending machine intact” and sending one Long Beach fireman to Community Hospital in serious condition from smoke inhalation. Fire investigators said the blaze started at 2:10 a.m. in a heating system behind the stage. No one was in the theater when the fire broke out.

Owner Guy G. Black. 5351 Harco St., said that the building was a total loss. “The roof is ruined, the screen is a wreck, the seats are either burned or water-logged, and the projection room is covered with water.” the owner declared. “Only the four walls and the candy vending machine are intact.”

My father, Guy G Black, used to tell me about the Ritz and how it burned down. Guess that was it for him as an owner as he was happy being a projectionist for the rest of his life. It was something he really enjoyed and didn’t stop doing until he was forced to walk a picket line against UA sometime in the late 1970’s early 80’s. But for some reason, I thought the Ritz was on Anaheim somewhere between Alamitos and Cherry.

Thanks for honoring my dad by including his name in the newspaper article.

Here is a notice published in the July 19, 1924, issue of Building & Engineering News:

The Ritz doesn’t appear to have been exactly on the corner, but magazines weren’t always precise when giving locations, so there’s a good chance the project was the Ritz. If someone could discover the opening year it would help.

Cards in the L.A. Public Library’s California Index call this house the Ramona Theatre, which must have been its opening name, probably in late 1924. The July 18, 1924, issue of Southwest Builder & Contractor said that the contract for construction of a two-story brick store, theater, and office building at 681-687 Redondo Boulevard in Long Beach had been let to Alfred Butterfield. Frank Wynkoop, of Siebert, Hedden & Wynkoop was the architect. Albert T. Shaw was the owner of the project.

This opened as the Ramona theatre on November 29th, 1924. Grand opening ad posted. 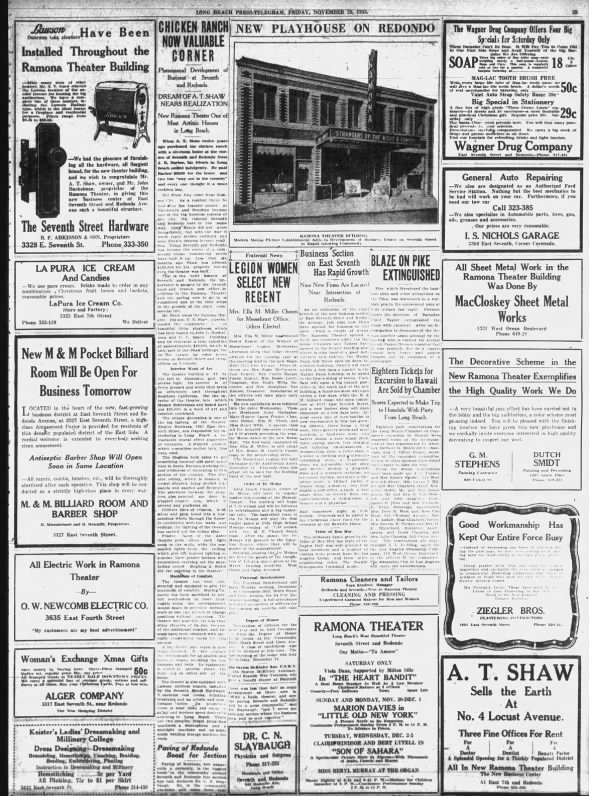 This reopened as the Ritz theatre on May 5th, 1933. Another ad posted.

Red Skelton’s “The Yellow Cab Man” proved to the final screening after fire destroyed the theatre on December 12, 1951.

In January of 1931, it changed names from the Ramona and became the short-lived New Redondo Theatre