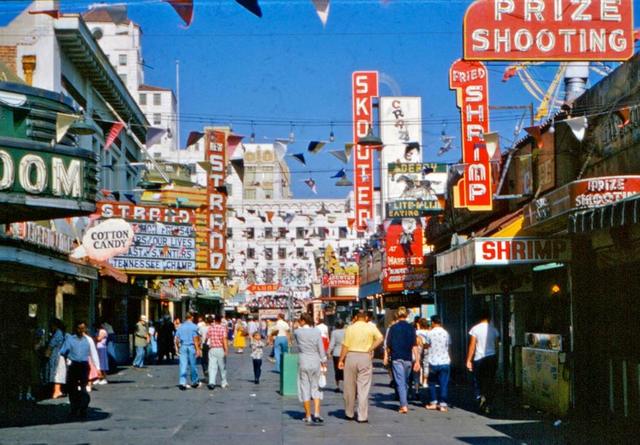 The Strand Theatre was one of many theatres that once was a part of downtown Long Beach movie going.

I have 2 friends currently living in Long Beach who played at the Strand. One, Art Claar, played trumpet in the vaudeville band and the other sang at the Strand. I am working on a documentary film about the old movie theaters in Long Beach. I would like to talk to anyone who has any memories or pictures of the old theaters. Contact me at

Here is a May 1958 ad from the Long Beach Independent:
http://tinyurl.com/4zcmpx

Here is an LA Times article dated March 5, 1908. It looks like the new theater was going up on the Pike, but the theater itself is not named.

The city, after a famine, is to have a surfeit of playhouses. A deal for a third theater was closed today between the Seaside Water Company and the E.C. Edmundson and R.C. McDonald, former manager of the Long Beach Theater. The site leased is a 58x200 foot lot between the bath-house and the Majestic Rink, and heretofore has been used as a children’s playground. Mr. McDonald has the plans and capital for a modern theater which will be erected at once and will cost $40,000. Meanwhile, the new Tarrytown, a block west, is being built, and the Naples Construction Company today signed contracts to begin work on the Bentley Theater, west of the Majestic Rink.

Here is a December 1947 ad from the Long Beach Press-Telegram:
http://tinyurl.com/czqhqr

The Strand can be seen in this 1938 photo from the Long Beach library:
http://tinyurl.com/2af84er

Well, it’s not a facade view – but you get the sign for the Strand:

It’s a vintage postcard view on Card Cow looking west along The Pike with the Bathhouse in the foreground (the columned building) and the steel framework of the Strand sign beyond.