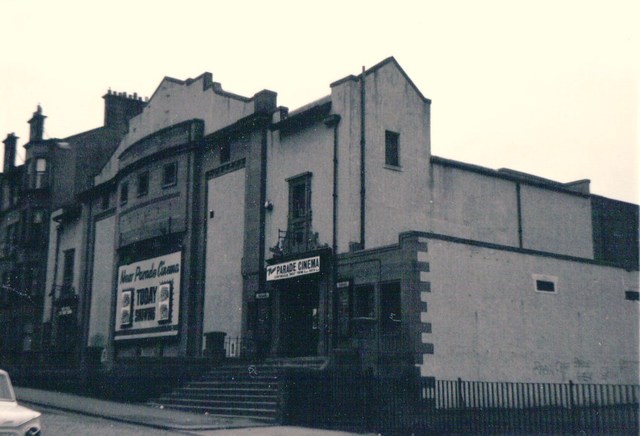 In the Dennistoun district of Glasgow, the Parade Cinema was opened on 14th February 1921 by George Smith and James Welsh. It was robustly built. There were separate entrances for the stalls and circle and the seating ranged from leather upholstered benches at the front stalls, which cost just 1d and were usually crammed with children, through leather tip-ups at the rear to plush seats in the circle.

The cinema was sold to a Gaumont subsidiary in 1928.

It closed on 3rd August 1961 and became the Dennistoun Top Rank Bingo Club. However, it was acquired by Jack Brown, an independent dance hall owner, who re-opened it on 30th June 1969, as the New Parade Cinema.

When he retired, the New Parade Cinema closed on 7th April 1986. After lying derelict for several years, in 1993 the front part was converted into a pub, with the façade restored and partially clad in bronze-coloured reflective glass panels. This is how I saw the building in June 2003.

Since then, the building has been demolished, leaving a vacant site, with the steps up to the former entrance being the only reminder of the Parade Cinema.