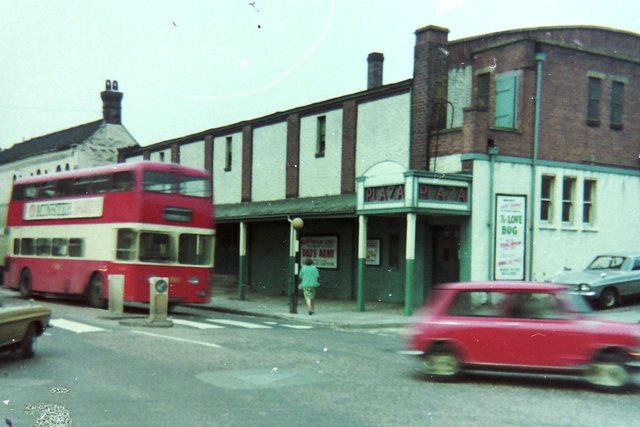 In Fenton, one of the six Pottery towns collectively known as Stoke-on-Trent, the New Plaza Picture Playhouse was opened in 1910. It was listed in the 1932 Kinematograph Year Book, although on Market Street, before the road was renamed King Street.

In 1940 the New Plaza Picture Playhouse had 550 seats, a proscenium 35ft wide, a 20ft deep stage and two dressing rooms.

In the 1953 edition, the by now renamed Plaza Cinema was listed with 600 seats.

The cinema survived into the 1980’s. In the 1980 ‘Cinema Directory’ published by the Cinema Theatre Association, the Plaza Cinema, now listed as King Street (and with the same [albeit updated] telephone number as in 1953), seated just 324, no doubt as a result of modernisation and the installation of better spaced seating. At this time it was owned by Broadway Entertainments Ltd.

The Plaza Cinema closed 9th January 1982 with Neil Diamond in “The Jazz Singer” and Dustin Hoffman in “Kramer Versus Kramer”. It became a Riley’s Snooker Club in 1985. In 2009 Javed Iqbal, a taxi driver, and Michael Davies, an electrical design engineer, re-opened the building as The Plaza Snooker and Pool Club.

In a nice nod, the current owners deliberately named their club the Plaza to recall the building’s original purpose.

The Plaza closed on Saturday, January 9th, 1982, having been a cinema since 72 years since 1910. The last programme was Neil Diamond in THE JAZZ SINGER and Dustin Hoffmann in KRAMER VERSUS KRAMER. I have complete programme details of the Plaza from 1949 to when it closed in 1982, together with an almost complete run of children’s Saturday matinee programmes from 1956 to when they were discontinued in 1974.

I was a projectionist at the Plaza on and off for nearly twenty years, starting in 1962. The film that was showing when I started work there was the X certificate drama A Kind of Loving, starring Alan Bates and June Ritchie. At that time, there was a staff of eight, including myself and, over the years, they’ve all since died except me. Yes, I’m the only one left. Benny Norcott was the manager from 1949 to 1981 and the Plaza was his life. In fact, I wouldn’t be surprised if his spirit is still there and has been seen on occasion. I wonder what the old place is like now inside and how they stop the snooker balls from rolling down the slope towards the screen.

Click on Photos to see a photo I took of the Plaza in August, 1971.

A COUPLE OF ANECDOTES ABOUT MY TIME AT THE PLAZA.

I remember when we were halfway through showing ‘Spartacus’ on the last run on a Saturday night in July, 1963, the navy blue Thames Trader lorry of The Potteries Transport and Cinema Supply Company arrived early at about 9 pm when there was still over an hour of the film left to run. The driver parked up his lorry and went inside to see the last part of the film. Eight reels had already been run and packed off into an unusually large eight reel transit case and I thought I would do the driver a favour by taking the case down the steps and putting it on the back of the wagon. Well, I dragged it downstairs, one step at a time and eventually reached the car park and dragged it an inch at a time towards the wagon. I dropped the side gate of the wagon and, puffing, panting and straining and using all my strength, tried in vain to lift it onto the wagon. Just then, there was a shout from the open window of the manager’s office. “OI!”, shouted Benny Norcott, “PUT THAT DOWN! YOU’RE AN OPERATOR, NOT A TRANSPORT DRIVER! IT’S HIS JOB TO LOAD THAT ON THE WAGON, NOT YOURS. IF YOU INJURED YOURSELF, YOU COULDN’T CLAIM A DAMN THING!” I dropped the case on the ground and it landed with such force that it made a three inch dent in the asphalt of the car park and I never did anything that daft again.

I remember back in 1968 that we were showing the X certificate film ‘Witchfinder General‘ and, ten minutes before I was due to start the film I was standing by the pay box with the manager, Benny Norcott, when this young lad came in. “You’re not coming in to see this!”, Benny told him. “Well, I’m over 16”, said the boy. “You haven’t seen 13, let alone 16”, Benny told him. “Well, they let me in to see it at the ABC, Hanley”, said the boy. “Well, you’re not seeing at the Plaza, Fenton!”, said Benny. “Now get!” and the boy got!

Added to photos, two pages from the Plaza programme booklet for August, 1963.