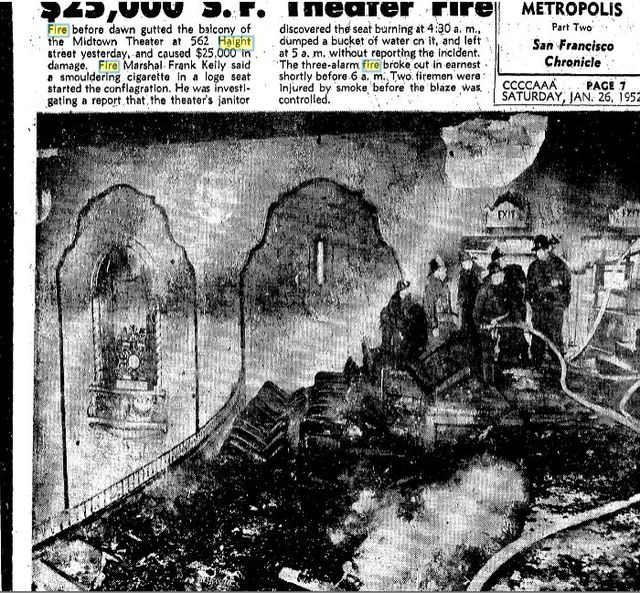 Opening originally in the 1920s as the Riviera, this theatre was the work of the prolific Reid Bros. architectural firm. Its original decor can probably best be described as Franco-Italian Rennaissance, much like the Reids' Grand Lake Theatre, only simpler. In the late 1930s the Riviera was extensively redecorated in Moderne style and renamed the Midtown, with a lofty stepped facade and a zigzag style neon vertical and marquee applied over the original facade.
In the ‘30s remodel much of the original interior plasterwork was retained, along with the cast iron staircase and Mezzanine railings, but all the light fixtures were replaced with Moderne fixtures of wrought sheet metal and stenciled ground glass.
Sometime in the 1950s, the theatre closed and became a church—the marquee and vertical sign ultimately removed and replaced by a neon “Jesus Saves” cross-shaped sign.
By the 1990s, the church had vacated.
In 1998, I was part of the crew which salvaged as many of the fixtures from the theatre as possible before it was gutted and turned into loft apartments. There was extensive water damage to the plaster, but several of the plaster bowl-shaped EXIT sign fixtures, flanked by female gargoyles, were saved. All of the auditorium wall light fixtures which hadn’t been completely smashed by falling rotten plaster were salvaged, as well as fixtures on the walls and ceiling of the Mezzanine, Lobby, and Vestibule. The only reasonably intact light fixture not saved by our crew was the largest chandelier in the Main Lobby. It was partially damaged and much too large to fit through the doors. Most of the cast iron staircase and Mezzanine railing sections were saved as well.
When the gutting of the theatre was taking place, the 1930s facade was removed, revealing the original 1920s facade, which emerged heavily damaged, although floral relief panels and remains of false balcony niches with iron railings were revealed. The new facade which was subsequently applied to the building retains a few historic features, but is largely a Postmodern style approximation, painted in the original sandstone tint.

Here are some additional photos from the SF Library:

Is this the theatre located between Fillmore & Steiner? I remember seeing a Beatles double-feature there in 1969 with a friend and her mother. I was very young, but I know it wasn’t the Haight Theatre because we took the 22 Fillmore to get there. I believe it’s condo’s now.

Reading the comments above I am trying to do research on the origin of the 2 Exits signs that I have that match the description of what you said was taken out of the Mid Town Theater. If anyone has anymore information or photos I would greatly appreciate it. Thank you Dan

danraymon, I have uploaded a photo of the aftermath of the fire, showing the balcony exit lights.

Thank you for the reply and photo. I am uploading a photo of my EXIT sign that came out of the California Theater in Dunsmuir CA…but I strongly suspect that it is not original to it due to its architecture. I also know that the owner of the CA Theater had other Theaters and family holdings in the San Francisco area. If anyone can provide any further information on it I would appreciate it. Thank you Dan