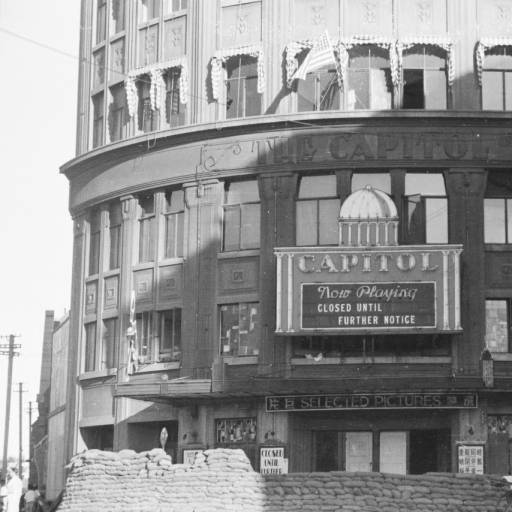 The Capitol Theatre took two years to build and opened in 1928. It was built by owner S.E. Shahmoon & Co. The proscenium is 32ft wide and the stage is 45ft deep and 53ft wide. It is still known as the Shahmoon Building and to others as the Guanglu Building. It is under restoration in 2016.

The Capitol Theatre launched February of 1928 in North Bund at the corner of what was 146 Museum at Soochow roads and now 146 Hu Qiu Lu Road at Suzhou Road S.

At 900-seats, the corner tower by architect C.H. Gonda left an impression outside and in. A space of that magnitude without obstructionist columns was a nice feat. The sculptures expressed harmony, grace and beauty as did wall figures. Long closed as a movie theater, the theatre was a place for night life becoming the New York, New York disco from 1994 to 1998. Empty in the 21st Century, a restoration project promised to return the palace to cinematreasure fresh.