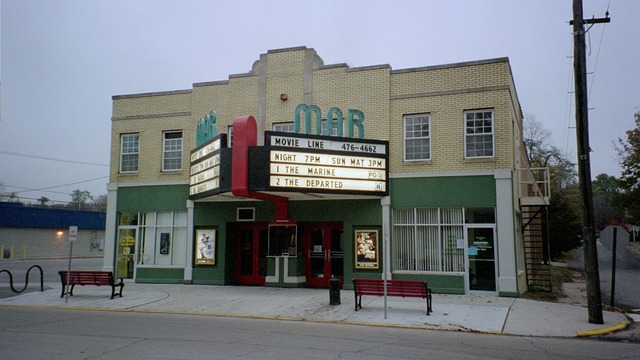 The Mar Theatre opened on June 15, 1937, built in Art Deco style, including a large triangular-shaped marquee, with the theater’s name spelled out in neon-lit letters. Originally seating 500, in the late-1990’s, an upstairs storage space was converted into a second 100-seat auditorium. The Mar Theatre continues to screen first-run features on both screens.

Here is another photo:
http://tinyurl.com/2mhjdv

I’d recommend this theater to anyone who is a fan of old style movie theaters like this one. They’ve done a great job of keeping it in good condition. Well worth the drive!

Built by the Butcher Brothers, a local family, it was two years in the making and cost $50,000.00. The Mar opened on Tuesday June 15, 1937. The engineering was state of the art for the time. The building was riveted structural steel with masonary and plaster walls. The ceiling, walls and floors were solid concrete to contain any fires. The projection booth was fireproof due to volatile nature of early film material. It had steam heat from two boilers in the basement and the new invention of chilled air conditioning.

The theater has always been used as a movie theater and is much as it was in 1937. Outside tenants occupy the two small storefronts on either side of the Mar just as it was originally. It still has the orignial marquee. The ticket booth and lobby are in the original configuration. Much of the original architectural hardware and lighting fixtures are still in use. The original stage and decorative ceiling are still intact. The original auditorium seats 300 with 4 channel sound and DTS digital capabilty.

In the late 1990’s a second auditorium, which seats 64 was made from storage space. It has 4 channel Dolby.

The Mar is still a FIRST RUN THEATRE, playing CURRENT FILMS on the NATIONAL BREAK. They also play a limited number of old classsic movies 3 to 4 times a year.

Would be great to have photos of the interior, old photos and more info!

Manteno, Illinois
MP 47 on the IC/CN/AMTRAK “Main Line of Mid-America”