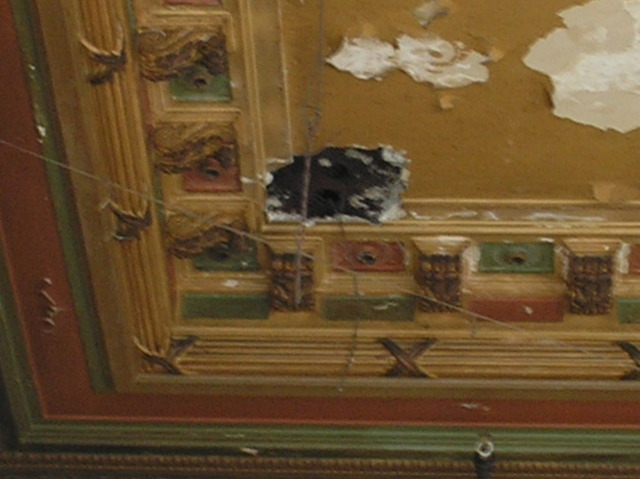 This theatre, built in 1912, is probably best-known by its original name, Pantages Theatre, though it had numerous name changes throughout its life.

The building was absorbed into an expansion by the adjacent Oakland Tribune; looking up from across 12th Street, one can still see the very top and stage-fly tower of what was the auditorium of the former Pantages Theater.

From a male friend who worked at The Oakland Tribune in the 1980’s and early 1990’s. The newspaper morgue (library) was located in the old theater. I asked him what he remembered:

“Actually they had a false ceiling but I do have some memories of the storage area where the photo dept was. That was up in the rafters sort of and it was a cubbyhole type area. Until they moved out the false ceiling I don’t think you could have seen it. The remodel was cheesy and they did a good job of making it ugly. I understand the women’s bathroom was great but of course I was never let in.”

Here is an ad for the Roosevelt in the Oakland Tribune, July 1938:
http://tinyurl.com/c8qko7

I’m doing research for the Three Stooges Fan Club, on black supporting player Dudley Dickerson. He MAY have been married to Marie Dickerson, who is listed in several Oakland Times articles as a performer at the Premiere in 1933.

Does anyone have any information on her? Thanks. Please email me at:
Frank Reighter

Various issues of Building and Industrial News in 1911 indicate that the firm of O'Brien and Werner had already drawn the plans for this building before Alexander Pantages entered the project as lessee of the theater portion. At that time, B. Marcus Priteca was brought in to modify the theater design for Pantages. Had Priteca designed the building from the ground up, I’m sure the exterior would have been far more ornate than Matthew O'Brien and Carl Werner’s restrained commercial block.

This Google Books preview includes pages detailing the history of this theater with pictures: scroll down to view pp. 25-27.

This opened on January 23rd, 1926 as Hippodrome. Grand opening ad in the photo section.

and reopened as Roosevelt on February 20th, 1935. Another ad posted.

and reopened again as the Downtown theatre on November 8th, 1939. ad below: