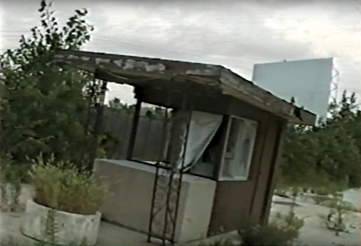 Opened as the Tee and See Drive-In in 1962, this large single-screen drive-in was located on New York Street at Route 59 in Naperville. It received its unusual name due to the fact it originally was located alongside a golf course, where golfers could watch a movie after golfing. The drive-in once had a playground and miniature golf on its property in its early days.

The neighboring golf course closed by the early-1970’s, and the Tee and See Drive-In was renamed the Skylark Drive-In in 1972. After a wind storm in 1973, the screen was blown down, but quickly rebuilt. After the Fox Valley Center shopping center opened in 1975, with its four-screen movie house, the Skylark’s popularity began to wane. It closed and reopened a number of times during the 1970’s and 1980’s. The Skylark Drive-In closed permanently in 1987.

While the screen and concession buildings have long ago been demolished, traces of the Skylark Drive-In still remain today, among the wilderness that is slowing reclaiming the site again. The rusted poles which speakers were once hung and the base of the marquee still remain. Sadly, the former drive-in site is largely forgotten, and used illicitly for dumping trash.

There is no longer any evidence of this drive-in ever existing. The area has been completely built up with strip malls & big box anchor stores. Sad. Driving through this place today; you’d never think a drive-in once stood there.

Video footage of the Skylark, taken in May 1988 after the theater closed for good, is available on YouTube at: