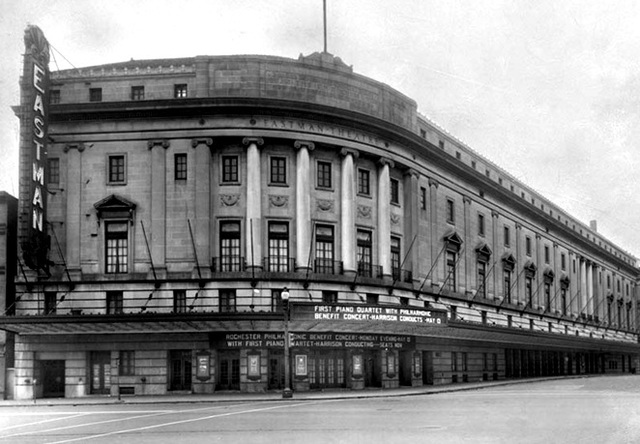 The 3,352-seat Eastman Theatre opened September 4, 1922 showing the silent version of “The Prisoner of Zenda”. It was presented to the city as a gift from George Eastman, who had founded the Eastman Kodak company. Carved over the entrance facade is the ‘For the enrichment of community life.’

George Eastman wanted to expose the public to classical music and thought that a movie theatre with a well trained orchestra and organist would be a good way to do it. Though not as spectacular as some movie palaces, the Eastman Theatre has a lovely oval entrance lobby with a bronze box office, marble columns, wall hangings depicting the story of Psyche and Cupid, and well detailed plaster work.

Throughout the theatre the various lobbies, staircases and lounges still contain most of the elegant furniture, antiques, and artwork (including an original mural by Maxfield Parish) that decorated them on opening night. Though not Atmospheric in style, the original scheme for the auditorium was that of sitting in a huge elaborate pavilion open to the outdoors. The sidewalls are of plaster made to look like rusticated stonework and have large murals depicting processions of musicians parading by (still in place today). The main emergency exits are guarded by busts of Bach and Beethoven. During its days as a movie theatre the stage setting for the screen was made to look like an Italian garden. A shallow dome illuminated by a huge chandelier dominates the entire space.

As a side note, the light fixtures to hang in the corners of the ceiling above the balcony had not arrived by opening day, so the workmen took a pair of washtubs, wired them for electricity, ornamented and gilded them, and hung them up to do temporary duty until the real thing arrived. 81 years later the temporary fixtures are still in place.

The Eastman Theatre was briefly leased to the Publix chain, but with the advent of talkies the theatre’s original purpose of presenting good music to the public was not being served. The Eastman Theatre became a concert hall in 1930 and has been home to the Rochester Philharmonic ever since.

Henry, I agree with almost all which you just wrote. But, maintain all you wish, without any evidence, your conjecture is speculation. That’s the only point I was making.

I’m life long Rochestarian, btw. I sang in the renovated theater a couple of weekends ago and the sound, while modestly improved, is still not ideal. (And, Eastman is turning in his grave over the additions of boxes, for the elite, to his theater.)

Well, evidence would be hard to come by at this late date:–) We’ll agree to disagree, but I don’t consider it to be an earth-shaking matter. BTW, Brayer indulges in a bit of speculation in ch. 30 (“My Work is Done”) of the Eastman biography, with documentation. I can’t attest to the thoroughness of her research due to of my ignorance of her sources, but since I’m no longer constrained by the rules of academe I’m willing to take her at her word.

Interesting to have your take, as a performer, on ET acoustics. That is the problem with a hall of that size and configuration. I played there a number of times in orchestra and wind ensemble, and sitting on the stage it was difficult to hear the other performers because a lot of the sound went up into the fly loft (in those days there was no shell, such as there is today, or at best there was a rudimentary one), and a lot of sound was absorbed by the audience bodies and the empty seats ;o} But visually it was a most impressive space. When Mercury Records made their legendary “Living Presence” recordings, on special Ampex 35mm tape machines, in the ET in the 1950s and ‘60s, they took great care with the three-microphone placement, which is why those recordings come off so well even by (or maybe especially by) today’s standards. I understand that the Mercury recording engineers eschewed the kind of electronic gimmicks that have become so commonplace in today’s environment. I have a number of the original LPs as well as some CD reissues, and they sound terrific (esp. the LPs).

Sorry, I didn’t mean to press my point quite so hard.

As an audience member my favorite place to sit was center about half way up the balcony. Even then (with the earlier fish scale detailed shell) whenever the piccolos or trumpets played I could distinctly hear them bounce off the high left wall behind me and into my left ear. I always found it funny that the high priced seats in the mezzanine had the worst sound of all. Although I love the almost domestic intimacy of the space.

I have experienced the same acoustical richness in other theaters: the higher up, the better sound. Here in Allentown, the best seat in the house IMO for hearing the Symphony is the center seat in the last row of the balcony of Symphony Hall (formerly the Lyric Theater, a McElfatrick-designed house). Those balcony seats are located under an acoustical dome. The builders knew what they were doing back in the day. OTOH, any seat under an overhang, as in a mezzanine, is generally not good for sound, as you observe. Your comment about the box seating added to the ET at renovation reminds me that this vestige of European privilege generally did not survive here in the U.S. The oldest concert hall in the country, Philadelphia’s beautiful Academy of Music (1857), designed by Napoleon LeBrun, has only four boxes, two on each side of the stage. And those box seats provide the absolute worst view of the stage! “Go figure,” as they say.

Just a comment on some of the above posts. First of all, the new box seats don’t look nearly as dreadful as I feared they would, but I hope they don’t look worse when I finally get back to Rochester to see them in person. Second, if George Eastman’s suicide is a well kept secret at the Eastman School, I can only say that it must be that Eastman students don’t get out much. As a native Rochesterian, I can say that the manner in which George Eastman met his demise is well known by anyone in the city who keeps half an ear open.

I was writing of my experience at ESM in the 1959-64 period. I don’t know what goes on there now. And let’s face it: there wasn’t much to “get out” to in Rochester in those years for a college student, unless it was the nearest bar (NY drinking age was 18 back then, for better or worse—-mostly worse). And trust me when I say that being a native is vastly different than being a transient from the big city (I came to the UR by way of NYC). The general public was not wandering around the streets saying “George Eastman committed suicide.” Most of us students knew George Eastman only as a portrait hanging on the wall of the second floor corridor; we were there to learn how to operate a musical instrument, not study the benefactor’s life story, so while we had our musical ears open it was not to listen to whatever historical bits happened to filter down to us . I’m not defending it, but that’s the way things were as I saw them. I’ve learned a few other things in the years since ;–)

No doubt it should, but in the (near?) future our descendants will wonder what “Kodak” was. 8-(

Far as I know, the building is still the Eastman Theater. Only the room is named Kodak Hall.