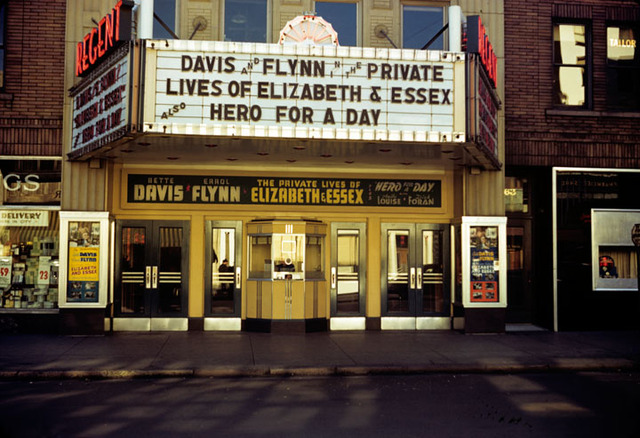 The Regent Theater opened November 10, 1914 with 1,800 seats, and was most likely Rochester’s first deluxe movie house (as opposed to a nickelodeon). It was located in the first block of East Avenue, just around the corner from the Eastman Theatre, and a few blocks up from the Little Theatre. By 1941 it was operated by Paramount Pictures Inc. through their subsidiary Frank Walker.

During some cleaning that took place in the 1950’s, a mural was uncovered above the proscenium, and was restored to its original appearance. The Regent Theater disappeared in 1973 and was replaced by (what else?) a parking lot.

The Regent closed early 1973 and was demolished in November 1973. The No. 40 Wurlitzer Hope-Jones organ was saved from the theatre as it was being torn down and was put into storage by the Rochester Theatre Organ Society.

When it closed it was part of the Martina Theatres chain. After closing it was used by the Rochester Film Festival occasionally. Saw “Weekend of a Champion” about racer Jackie Stewart here. It was a small older theatre but very nice in its day.

I have a transom stained glass window that came from a theatre in Rochester. My father bought it in the 70’s. I’m wondering if it’s from this theatre, or possibly another still-standing theatre. It has a cornucopia design. If anyone has any info about this, please respond. Thank you.

Every theater that was purchased by the Martina Chain,was downgraded into a secondary show house and eventually closed as a result of poor management.

The Regent hosted at least one live event in its last year. The March 24, 1973, issue of Billboard said that B.B. King would perform at the house on April 1.

The Regent was being operated by Paramount in 1946, when the July 2 issue of The Daily Record, a Rochester business and legal publication, reported that the chain would remodel the Center Theatre and rename it the Paramount, and build a new lounge at the Regent. The architect for remodeling the Center was Michael J. DeAngelis, and though the article didn’t specify him as the architect of the Regent project, it’s likely that it was a package deal and he designed both.

An article about the Regent. http://media.democratandchronicle.com/retrofitting-rochester/regent-theatre