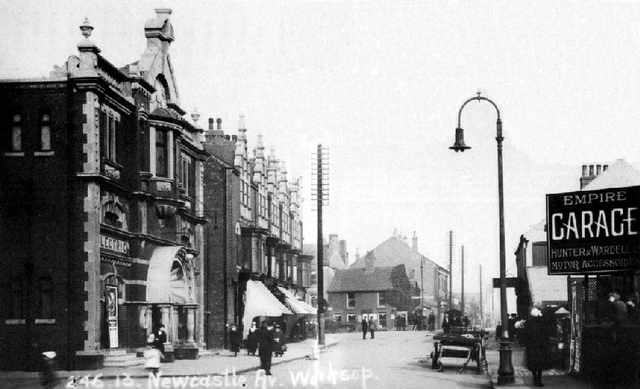 Located in Worksop, Nottinghamshire. The Royal Electric Theatre was opened on 25th September 1911 with cine-variety. It was designed by architect F. Hopkinson and seating was provided in stalls and balcony levels. The proscenium was 20ft wide and the stage 16ft deep. There were dressing rooms on each side of the stage. By 1914 it had been re-named Royal Theatre and played more variety programmes rather than films. It closed on 25th October 1919 with the Fox production “Swat the Fly” starring the Lee Kiddies.

After some renovations had been carried out in a Tudor Revival style, it re-opened November 1919 as the Picture House. It had been equipped with Gray & Davidson (church type) organ. Worksop based architect B.D. Thompson was responsible for the renovation work. The opening film was “Rose of the Blood” starring Theda Bara. The cinema now had a small café for the convenience of its patrons. The Picture House was equipped with a British Thomson Houston(BTH) sound system on 23rd September 1929 when the first talkie to be shown was Alfred Hitchcock’s “Blackmail”.

The Picture House was taken over by the Newcastle based Essoldo chain in 1954 and after a refurbishment it was re-named Essoldo on 27th December 1954 when it re-opened with Richard Burton in “The Robe”. It now had a Western Electric(WE) sound system. The café was closed in the late-1960’s and the Essoldo closed on 15th January 1972 with “Murders in the Rue Morgue” and “Return of Count Yorga”. The building had been sold to the government and was demolished to build an office block named Crown House, initially occupied by the Ministry of Social Security.