Malonga Casquelourd Center for the Arts 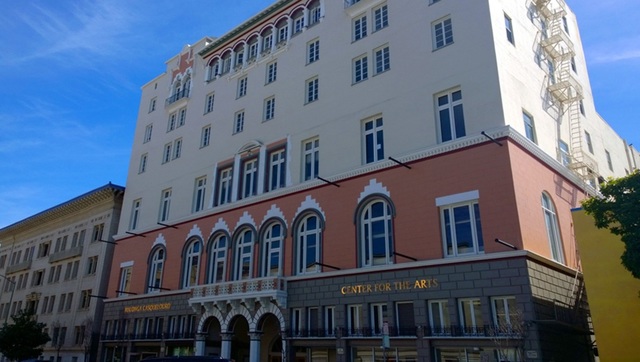 This small theater, part of a hotel/club building, opened in 1935 as the City Club, became the Paris in the 1950’s and closed in 1962; reopened about 1971 as the Metropolitan (apparently as a supper club), and operated briefly as the Seasonal, a Chinese movie venue, in the early 1980’s.

The Alice Arts Center recently changed its name to the Malonga Casqueloard Center.

Correction—-I meant to say Malonga Casqueloard Center for the Arts.

This theater’s (and building’s) style is Renaissance Revival.

I used to be a lighting designer for the Oakland Metropolitan Ballet Theater Company in the late 1970’s which performed at this theater. At the time it was also a venue for showing films from India. It had a fairly large seating capacity of around 500 seats.
The stage had an old resistance type lighting dimmer system as well as a full ‘fly gallery’ that used sand bag counter weights.

Vern Nerden was the Artistic Director of the company and created some of the finest original ballets I have ever seen.

Details of the building can also be found from a City of Oakland Planning Comission report here: View link

Notable details:
Built in 1927-28 by the Womenâ€™s City Club of Oakland and the East Bay
Designed by the firm of (Chester) Miller & (Carl I.) Warnecke
In 1948 it became a Moose Lodge and then a residential hotel.
In the 1970’s I knew this facility as the Metropolitan Theater. I remember that we stored costumes, props and sets in rooms in the building.
The projection booth was unusually large.
The lobby was also large but without a formal box office or way to strictly manage paying audience attendees.