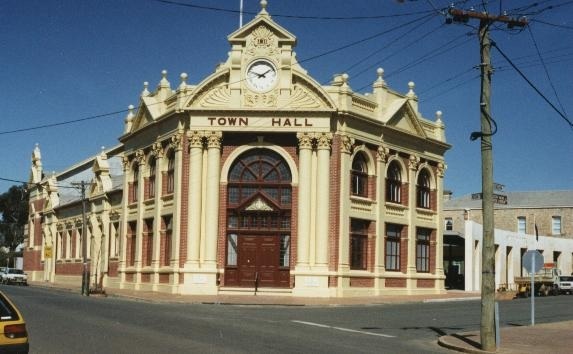 Located on the southwest corner of Avon Terrace and Joaquina Street. The York Mechanics Institute(The first York Town Hall) opened in 1863. Movies were first shown in September 1900. There was possibly a fire at the hall on 3rd February 1911? The York Mechanics Institute was demolished in(early or mid-1911, and a new York Town Hall built on the same site. and opened on 29th November 1911. A picture gardens(unnamed?) was opened behind the York Town Hall in(1942?) by Paddy Baker.

Movies stopped showing in York Town Hall in(1970?). Pictures stopped in the Picture Gardens(then operated by John Marsden, who took over from Paddy Baker) in the 1970’s, the last film was “Those Magnificent Men in their Flying Machines”. The York Town Hall is still there used as the York Visitor Center and for functions, and (the Shire of York Council offices?). unknown if the Picture Gardens site is still there?