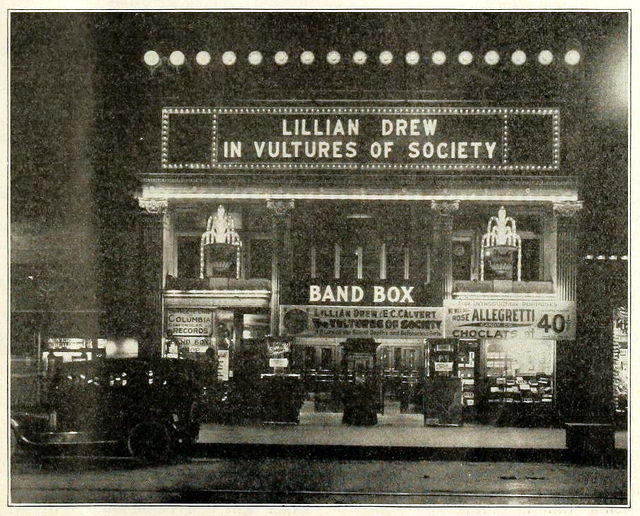 This early (and quite short-lived) Loop movie house opened on October 22, 1915 with E.J. Ratcliffe in “In the Palace of the King”. Located on W. Madison Street, near N. LaSalle Street, and sat around 300. It was managed by Jack Haag, who instituted a women-only policy at the Band Box Theatre in 1916, screening films like “The Unborn”, which censors deemed unfit for mixed-sex audiences.

It remained successful in this highly-unusual format for the remainder of the theatre’s operation. Haag later went on to manage the Ascher Brother’s South Side Metropolitan Theatre.

The Band Box Theatre closed by the early-1920’s, and was demolished not long after.

Somewhere on the vast internet, is a link to a `50’s juke box accessory called Band Box.
It was a miniature 24 inch half circle stage with curtains,that had big-band dressed puppets that appeared to play little instruments along to the juke box. The print ad was hilarious.

I beleive the company that made them was out of Chicago as well. Band Box Theatre might have been where they got the name from.