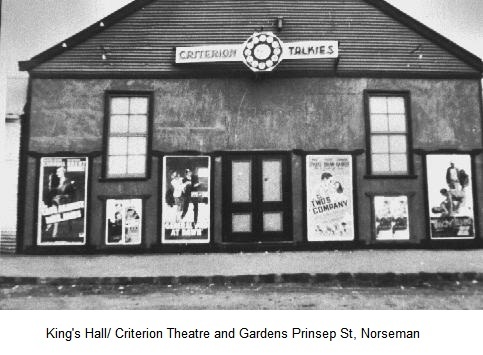 Kings Hall and a skating rink(roller) was built beside the Criterion Hotel on the North- west corner of Ramsey Street in(1890’s?). The first movies in Kings Hall was in(1910 or 1915?). People bought sweets across the street in a shop, there was no concession in the hall itself.

Kings Hall was taken over by Criterion Talkies and renamed Criterion Theatre in 1934, and movies also starting been screening in the skating rink(Gardens) next door. The gardens stopped showing movies in(1952?). The Criterion Theatre stopped showing movies in the late-1970’s when the Norseman Drive-In started operating. The theatre and the shop and the skating rink were demolished(late-1970’s or early-1980’s?) and the materials taken down South to Salmon Gums to used as sheds on a property(location unknown?)