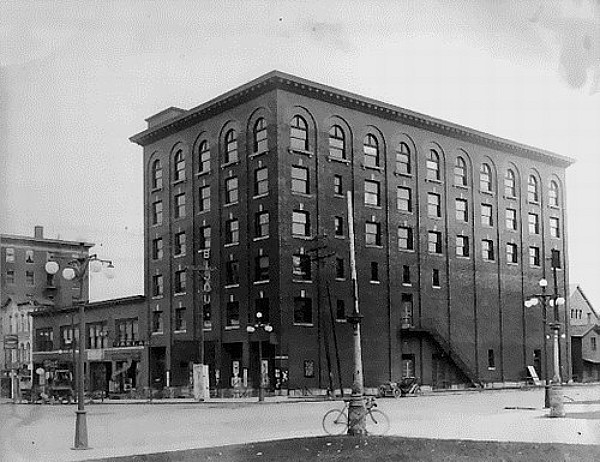 The photo of the theatre is facing NE, in looking at the shadows. The theatre, to the best of my knowledge, was located on the NE corner of Wash/Mich. It was torn down many years ago and now an office building stands in its place. I think a bunch of lawyers practice out of there.

W. S. Butterfield was operating the Regent Theatre in Lansing by 1924, according to the August 25 issue of The Film Daily that year.

“LANSING. MICH. — The Bijou theatre is to be remodeled during the Summer season at a cost of $50,000 and reopened under the name of The Regent as soon as the work is finished, according to announcement made by W. S. Butterfield and Harold Bird of the Bird estate, who controls the property.”

The Bijou Theatre originally opened at a location on East Ottawa Street in 1905, but moved into its new quarters in the Oakland Building in 1907. The new house was set to open on Monday, April 8, according to an article in the April 6, 1907, issue of The State Republican (scan at Flickr.) The address of the Oakland Building was 125-129 West Michigan Avenue. If the theater entrance was in the center bay its address must have been 127 W. Michigan.

The location of the Bijou was the southeast corner of West Michigan Avenue and South Capitol Avenue. The 1907 newspaper article mentions some of the theater’s emergency exits debouching onto Capitol Avenue. This web page has a postcard showing the Bijou building, and is captioned “South side Michigan Ave., between Capitol and Washington Aves., Lansing, Mich.” The grassy areas in the foreground were on the grounds of the State Capitol Building.

The fire which gutted and partly collapsed the Oakland Building took place in the early morning hours of December 22, 1923. After the ruins were demolished the 300-room Hotel Olds was built on the site. The hotel building, still standing, has been converted to offices for the State of Michigan and is called the George W. Romney Building.