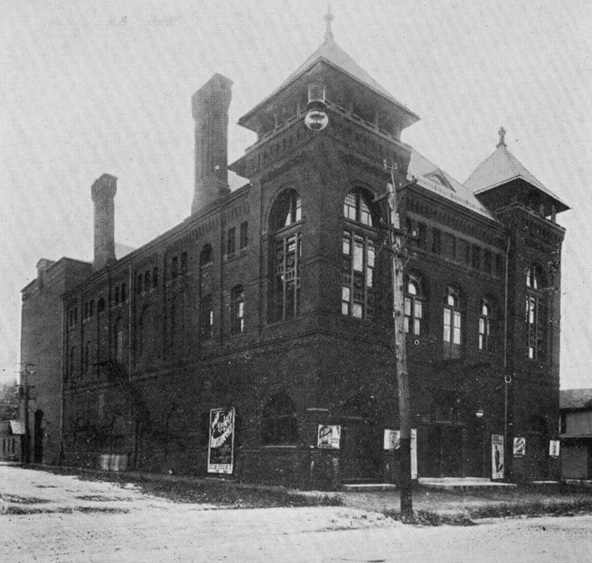 The 1,200-seat Hanover Opera House was opened on September 12, 1887. Movies were being screened by 1907. In 1909 it was modernized by architect Edward Leber of architectural firm Hamme & Leber of York, PA. Operating as a movie theatre by 1926 when it was listed with 1,000 seats. This continued until at least 1929. On November 12, 1930 it was renamed Park Theatre and the seating capacity had been reduced to 736. It was operated by Warner Bros. Circuit Management Co. It was remodeled to the plans of architect David Supowitz in September 1939, reopening as the New Park Theatre.

In 1950 it was taken over by William Goldman Theaters Inc. and the seating capacity was given as 1,250 and this continued until its closure on September 8, 1964 with Telly Savalas in “The New Interns”. It was demolished in August 1967.

The Hanover Opera House launched with live entertainment on September 12, 1887 with Middie Maddern in “Caprice.” Moving pictures were added to the mix at least by April 13, 1907 when Harry C. Naill began playing motion pictures. They proved so popular that in 1909 two things happened. The first was that a new movie theatre with 360 seats was opened by Westfall and Nydeggor in downtown Hanover. The second was that the Opera House was modernized to the plans of architect Edward Leber of Hamme and Leber of York.

In March of 1919, new operator Fred Bitner finally installed permanent projectors with two Powers 6B units and moving to regular movie theater fare. He also brought back to the stage one Middie Maddern (now Middie Maddern Fiske) who had opened the venue almost 35 years earlier. But silent feature films proved popular and rotated with live events until the competing movie houses converted to sound. The biggest silent titles started at the Opera House including, “Birth of a Nation,” “Ben Hur,” and “The Covered Wagon.”

New operator Milton W. Shaeffer took on the venue and converted to sound on November 28, 1930 as the Park Theatre. It now had Western Electric sound and Simplex projectors. However, it soon closed as sound films weren’t satisfactory and got a new auditorium treatment opening as the New Park Thatre on October 16, 1931 with “The Squaw Man.” It returned to the Park moniker dropping “new” thereafter.

The venue got a major refresh to the plans of David Suppowitz relaunching as the New Park Theatre launching September 15, 1939 with Spencer Tracy in “Stanley and Livingstone.” Warner Bros. Circuit operated the New Park turned Park until divesting with many theatres due to a consent decree.

William Goldman ran both the Park and the State until closing both in 1964. The Park closed September 8, 1964 with “The New Interns.” In August of 1967, the former Hanover Opera House turned State Theatre was demolished.