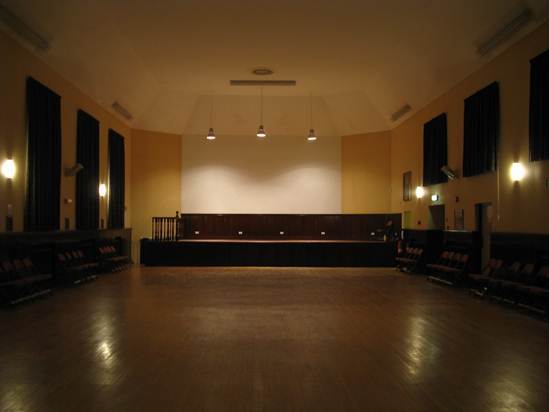 In the Aberdeenshire town of Ellon, midway between Aberdeen and Peterhead, the historic Victoria Hall opened in 1901. This large building has two main floors. The ground floor, together with its associated extension buildings, is occupied by the local branch of the Royal British Legion, whereas the first floor is home to a large function hall (“The Victoria Hall”) and associated facilities run by the Victoria Hall Trust.

In 1939 film shows started to be presented at Victoria Hall by Glen Cinemas, run by Arnold Burns, an engineer/welder - and also a magistrate. At one time or another he operated around a dozen cinemas in village halls in Aberdeenshire.

Films were shown on three nights a week. Two Ernemann Model 11 or 111 35mm projectors were permanently installed in an operating box in the centre of the small balcony. By the 1950’s the shows had dropped to two a week; they appear to have ceased when the County Cinema opened nearby in 1957.

Despite the County Cinema being very short-lived (it closed in 1966) film shows did not apparently resume at the Victoria Hall until 2015, when the Hall was equipped with its own cinema quality digital projector, file server and a 5.1 surround sound system featuring a Dolby CP750 sound processor. This allows the screening of recent releases only a few weeks after initial release at the main cinemas.

Since then, the balcony area has been upgraded through the installation of an acoustic enclosure for the projector equipment, new carpeting and 29 new seats.

The building was designed by William Davidson along with Messrs Jenkins & Marr and is built from red granite. The foundation stone was laid on 1 September 1900. The hall hosts aerobics, dance classics, kickboxing and dog obedience training, and is available for parties, craft fayres and exhibitions. As of February 2017 two films are screened every fortnight on Sundays and occasionally on Saturdays.