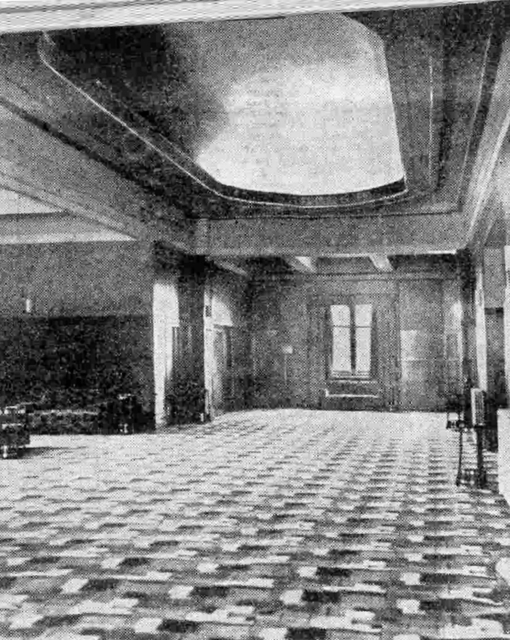 The Astoria Cinema, Aberdeen’s only suburban super cinema (in the suburb of Kittybrewster), opened on 8th December 1934 with “I Give My Love”. An unusually luxurious development, its elegantly massed, neon-lit exterior was followed through by simple, clean-lined spaciousness within. In the foyers, walnut panelling lent warmth under subtle lighting, much of it concealed, and richly carpeted staircases at either side led to a stylish circle foyer and into the auditorium. This was decorated in warm rose offset by bands of brown, silver and gold, the eye was effortlessly directed to the stage, with its ribbed 46 ft wide proscenium and main curtain of green damask which opened to reveal silver Roman satin screen tabs. The latest Compton theatre organ was installed which was a 3 Manual/8Ranks with Melotone instrument. The ‘jelly-mould’ console was lit from within in ever-changing rainbow hues while the instrument itself sounded from the grille to the left of the stage. As the building rested on a bed of solid concrete due to a stream which ran directly below, there was no possibility of sinking a well for the organ lift, so it glided on from the left side of the stage.

Despite its most pleasing design and having the best sound system in the city (RCA sound), the Astoria Cinema turned out to be unwisely situated and never really caught on with the public. It closed as a cinema on 13th August 1966, and not even conversion to the Astoria Bingo Club on 29th August 1966 could draw the crowds and it closed in December 1966. Demolition began in April 1967, leaving only fond memories of a cinema much loved by both public and those who worked there.