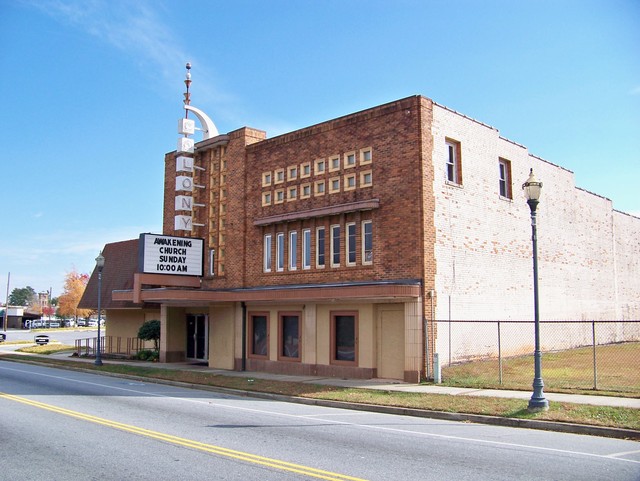 Here is a picture of this theater that I took in the spring of 2005.

Easley – The Old Colony Theatre – Said to be a ghost that haunts the old Colony Theatre in downtown Easley. The theatre was built on a house were a woman hung herself. People have heard strange noises in the balcony of the Colony Theatre, and have seen a women in the window.

Here is the website for the current occupant:
http://www.5pointfellowship.org/

A 1986 view of the Colony Theatre in Easley and a larger view here. (All the old theaters have a resident spirit)

The “Just Off the Boards” feature of Boxoffice Magazine, issue of December 8, 1945, includes a drawing of the Colony Theatre. The text reads in part

“…on this page (at left) is the front elevation perspective by architect Robert Boller of Kansas City, MO., for the new Colony Theatre, now under construction at Easley, S.C…..”

The drawing shows the same building seen in the photos linked in various comments above. The text also says that a local firm acted as supervising architects, but one initial of the name is unreadable in the scan of Boxoffice. The firm was W. _. Freeman, Jr. & Associates of Greenville.

Joel Armistead (comment of Oct 1, 2004, above) must have gotten an incomplete version of his family’s history. The theater his grandparents ran in Easley in the 1920s was not the Colony but the Lyric.

An article about Harold Armistead, based at least in part on an interview, was published in the October 18, 1971, issue of Boxoffice, shortly after he had sold the Colony and retired. It said that Harold Armistead’s father had come to Easley in 1923, when he bought the Lyric Theatre on Main Street. Harold Armistead was operating the Lyric at least as late as 1950, the last year in which I can find it mentioned in Boxoffice.

This article also said that Armistead had opened the Colony Theatre in 1948. As construction was reported to have been underway in late 1945, that was a very long time for building. Perhaps the 1945 Boxoffice item was premature in announcing the start of construction. There can be no doubt of the 1945 date for the Boller design, though.

There’s also a brief item in the June 7, 1947, issue of Boxoffice saying that Harold Armistead was building a $35,000 theater at Easley. As the Colony looks to have been a considerably more costly building, I think this unnamed house might have been the theater for black patrons Armistead built and operated in then-segregated Easley for a few years, which was also mentioned the 1971 article.

joel, how are you related to my aunt percilla and her son jon armistead??? i am the grandson of the late sara and jack cook, sara was my aunt percillas sister, we lived right next door to them on east first ave in easley i can remember them telling us stories to jon working thier when he was younger, harold was aunt percillas husband if im not mistaken , i never had a chance to meet him. i sure do miss that theater, i can remember when they got the NEW movies and later on remembering when the new theater on highway 123 got the new movies , and the colony got older movies and slowley starting going downhill.

and if im not mistaken,, that looks alot like jons car that he used to drive ( up until a few years ago!!!!) in that pic of 1984 colony, (not the bug) he still has that car in the backyard of the house to this day.

I WAS THE LAST OWNER OF THIS LOCATION. THE THEATRE WAS BUILT IN 1949 BY HAROLD ARMISTEAD, TWINED IN 1975 AND CLOSED IN MARCH OF 2004. THE ARMISTEAD FAMILY ALSO WAS INVOLVED THE THEATRE EXHIBITION INDUSTRY IN EASLEY PRIOR TO THE COLONY.
LIST OF OWNERSHIP: MR. HAROLD ARMISTEAD WINYAH BAY THEATRES – FAIRLANE/LITCHFIELD THEATRES UNITED ARTIST THEATRES – PROPERTY OWNED BY MR W.C. CRANE, JR. MARQUIS THEATRES – JEFF AND WENDY SNEAD G.J. TURNER ENTERTAINMENT COMPANY – GREGORY TURNER

Here is the page with Robert Boller’s drawing of the Colonial Theatre in Boxoffice of December 8, 1945. Despite the long delay in construction, the drawing looks very much the same as later photographs of the theater as actually built.

This item about the Colony Theatre is from the November 15, 1947, issue of Motion Picture Herald:

“Construction work is nearing completion on the new Colony theatre in Easley, S. C, according to Harold Armistead, manager of the Lyric theatre who will also manage the new house. The Colony will have a capacity of 707 on two levels, and facilities will include a soda shop. Eventually a coffee shop will be added to the second floor. The Lyric and Colony are owned by Mrs. E. A. Armistead.”