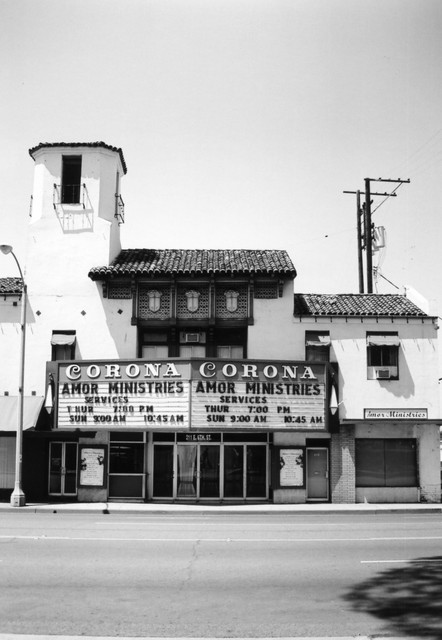 Carl Boller used an Atmospheric style interior design to emulate an outdoor setting in the auditorium of this Spanish Colonial revival theater. Information on file at the Corona Public Library says that it was built by Glenn Harper, who opened it on August 29, 1929. The 900-seat cinema, with attached shops and businesses, was Corona’s first-run house for many years, receiving exterior remodels in 1956 and 1961. In the late-1970’s, it was briefly an unsuccessful discount house and then played Spanish-language films before closing in 1982 when it was taken over by a church.

In 1991, the Landmark Building, as it is also called, escaped demolition through the efforts of the Corona Historic Preservation Society despite the Chamber of Commerce who said that making it an historical property would tie up downtown redevelopment and “it is only 61 years old, not very historic.” With the endorsement of the city planning commission the building was put on the National Register of Historic Places in 1991 and is still being used as a church today.

During the late 1980s, Corona was one of the state’s fastest growing cities, and urban sprawl sent its neighborhoods in all directions. But many newcomers from Orange County and elsewhere don’t even know what the Circle is, and they often end up bypassing downtown for their own neighborhood shopping centers.

Now business owners in the Circle want to revitalize the area and return some of downtown Corona’s former glory to a number of city blocks now blighted by drug activity, vagrancy, graffiti and prostitution. Some long-neglected homes and businesses need to be razed or repaired, and, if nothing is done soon, business owners and tenants fear the situation will only get worse.

The Downtown Business Association recently hired an architect to study the possible preservation of the Corona Landmark Theatre and an adjoining office building, which were built in 1929 and are two of the few remaining examples of Spanish Colonial-style architecture in the city. The owners of both structures have taken out demolition permits for the sites after their buildings were determined to be unsafe in an earthquake.

In any case, city officials warn that the Circle could face worse times if a major regional mall is built elsewhere in Corona. Such a prospect has been discussed with developers for the past several years. A city needs “a sense of place,” said George Guayante, redevelopment director. “We’ve all heard the expression `there’s no there there.‘ That’s not Corona now. But we could lose that sense of place if we don’t do something to keep it.”

Posting to get this theatre back on my “notifications” list….