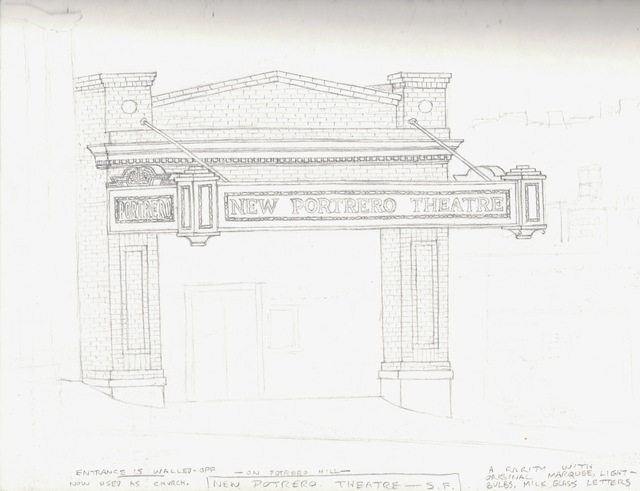 Opened as the Alta Theatre in 1913. The installation of sound equipment in 1930 also brought a new name: the New Potrero Theatre.

For over 30 years, it served the Potrero Hill neighborhood as a strictly mom-and-pop operation unique to a city as large as San Francisco. Mom sold the tickets, Pop ran the projectors. There was no snack bar, only vending machines in the lobby. One can only guess, but the two of them probably cleaned up each evening after the show as well. They ran no ad in the daily newspaper; a monthly calendar kept neighborhood patrons abreast of what was playing. Amazingly this operation lasted until 1963, at which time the New Potrero Theatre finally shut down for the last time.

Whatever became of Mom & Pop? Perhaps some reader can enlighten us. The building still stands, having been converted into offices, a neighborhood artifact of the long distant past when such a humble operation was not only feasible but profitable.

After it closed as a movie theatre, The Grateful Dead used the Potrero as a rehearsal hall. Circa 1968.

In a 1973 episode of “The Streets of San Francisco,” called “Trail of the Serpent,” thugs come
out of a theatre called “New Potrero Theatre.” Does anyone know what theatre they actually used for this? Assuming the theatre closed in 1963, I guess the producers decided to make the scene extra nostalgic for those in the know.

The building is now used for offices. While layers of paint were cleaned off the facade, exposing a very nice red and tan brick surface, the wonderful little marquee which had been on the theatre since at least the 1930s was removed, as were the slabs od white and grey veined marble which were still in place in the ticket lobby.

My grandfather Samuel Nasser started the Alta in 1913. My Dad worked there until 1927-28 when my Grandmother demanded he continue his education (MD UCSF). The family sold the theaters to Grandpa’s Brother who went on to establish the Nasser Brother theaters. The most well known exists today…The Castro.

I walked by this building yesterday and have posted a couple of pictures on the photos page. You can see on the facade where the marquee was attached to the brick which looks like it was never repaired after it was removed. Besides it’s nickelodeon and movie theater past it has functioned as a storefront church, a rehearsal hall for the Grateful Dead and now home to the London based Gurdjieff Society.