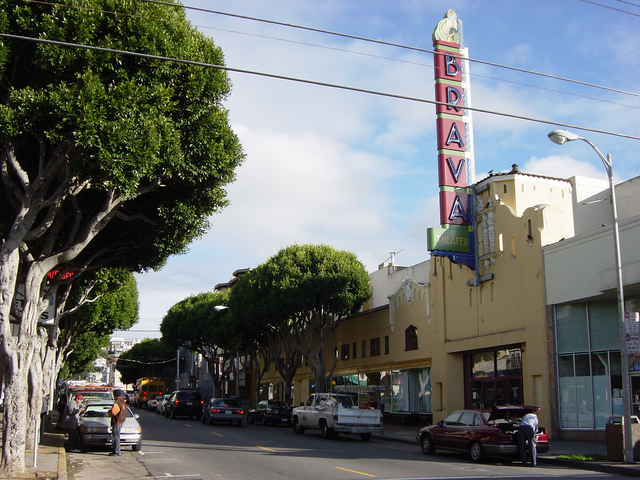 This neighborhood theatre opened in 1924 as the Roosevelt Theatre. It had 1,006-seats. It retained that name until at least 1957. In later years the theatre was known as the York Theatre.

The York Theatre closed as a movie house in 1993.

In the fall of 2001, the theatre was restored and reopened as Brava Women’s Theater Arts.

The theatre has retained its screen for movies but is now primarily a performing arts center.

Just for the record: The Roosevelt opened on 22 September 1926 with Norma Talmadge in Kiki. It was renamed York 24 on 7 March 1962, and later became known simply as the York.

When The Roosevelt Theatre opened it seated 1006 people. That’s info is from Fily Daily.

In its final few years as a movie house, the York was operated by the Red Vic collective; for a time it was their only venue as they had been forced to vacate their original location and had not yet found a new location for that theater.

THE S.F. YORK THEATER WAS FOR ABOUT 1 YR, “THE YORK REVIVAL CENTER”,
WHEN MY LATE FATHER AND I, HAD A CHURCH-REVIVAL THERE, IN APROSIMENTLY 1965 OR SO.

IT WAS A BEAUTIFUL PLACE AND MANY CAME TO KNOW JESUS CHRIST…
AS A PERSONAL SAVIOR!

According to the August 3, 1946, issue of Boxoffice Magazine, the Roosevelt Theatre, operated by Ben Levin, had been completely renovated, with new lobby, marquee, rest rooms, and decoration. The architect for the project was Otto A. Deichman. Unless there was another Roosevelt Theatre in San Francisco, this must be the place.

We loved the York in the late 80s, partly because you could smoke in the balcony. If I remember correctly, they had a dual effort with the Red Vic in the Haight. The schedule of films (which usually only ran for a day or two) was printed in a sort of poster format covering several months. We were always looking to see what was coming up at the Red Vic and the York.

I was a film student in the late 1980s while living in SF and attending SFSU. This was a very important theater for film students and the local film community since it was among a handful of independently operated theaters where you could see the works (today called ‘content’, and before that, ‘product’) of cinema’s most profound, productive and influential (living and deceased) directors working outside of the Hollywood production system.

Where else could we see the works of Andre Tarkovsky, Ingmar Bergman, Fellini, Agnes Varda, Mitzoguchi and Godard? There were a few others, like the Castro, The Roxy, and The Clay, and many others I am sure I have left out, but The York was special because it was the only theater dedicated to screening classic, second-run, foreign and domestic movies that was not a small, four-wall setup, in fact, it was a rather large theater with impressive architectural detail. By the time it closed it was definitely showing its age and was in bad need of updating, but nothing like The Rialto Theater in South Pasadena, made famous in Altman’s The Player, left to literally crumble to pieces.

Some of the things I missed about old SF are its vibrant collection of repertory theaters, most of which has now disappeared. One of my most memorable moments was screening my first Bergman film at the Surf Theater in the outer Avenues. Walking out of the theater at dusk, into a blanket of fog after experiencing Bergman for the first time felt like a drug-induced, mind-altering experience, like dropping acid for the fist time.

My last time seeing a film in this theatre (then known as the York) was during this same time (late 80’s) that sfinthe80’s mentions. The film was Stop Making Sense. I don’t know if Dolby had been installed but the acoustics were fantastic and shown on a fairly large screen.

This theatre was seen in an episode of the tv series Mythbusters(episode – Wheel of Mythfortune, Monty Hall myth).